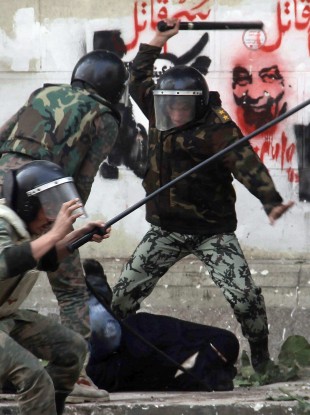 In a joint statement, five human rights organizations accused military rulers of exercising “unprecedented violence against protesters, with the targeting of female activists being a distinctive feature of the proceedings to disperse sit-ins, as depicted in pictures and video clips showing protesters being arrested, beaten, dragged and stripped of their clothes.”

While this video shows army soldiers dragging, beating and striping a female protester in the street.

The statement was signed by Nazra for Feminist Studies, the Cairo Institute for Human Rights Studies, the Association for Freedom of Thought and Expression, the Hisham Mubarak Law Center and the Women and Memory Association.

They also called for the establishment of an independent judicial committee to investigate crimes against peaceful protestors.