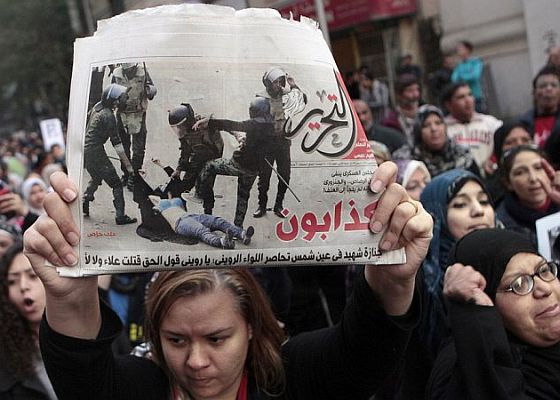 Sarah Carr reports: It was an image that shocked Egypt and within hours went viral: the woman in the exposed blue bra being beaten and kicked by a gang of soldiers during an attack on Tahrir Square protesters.

In a press conference on Sunday, General Adel Emara, a member of the ruling Supreme Council of the Armed Forces (SCAF), downplayed the incident, telling reporters that “they should consider all the circumstances” before judging.

On Tuesday, women responded. Some 4000 took to the streets in a march organized by the Mohamed ElBaradei Campaign and the April 6 Youth Movement.

Later on Tuesday evening, the SCAF issued an apology to the “women of Egypt,” in its statement Number 91.

“The SCAF reaffirms its upmost respect and admiration for the women of Egypt and their right to protest and of positive participation in political life on the path of democratic change Egypt is currently witnessing,” the statement reads. “All legal measures have been taken to hold officials accountable for transgressions,” it continues.

In Tahrir Square, women gathered, surrounded by men whose linked hands formed a cordon to protect them. One of the men, Mohamed Fathy, said he supported the idea of a women-only march because “they are here defending their rights and have to have their say.”

After circling the square once the march proceeded through downtown Cairo — the scene in 2007 of horrific mass assaults during the Eid vacation when packs of youths sexually assaulted women.

Their chants, “Girls of Egypt are a red line” — a variation on the now-abandoned “The Egyptian army is a red line” — echoed around the street. From balconies, office workers clapped and cheered. The women chanted for them to join them saying, “Come down from your houses, Tantawi undressed your girls.” Field Marshal Hussein Tantawi is the head of the SCAF.

There was pervasive anger against the army, with frequent chants for the SCAF to leave power and condemnation of violence by military “riff-raff”.

“Tantawi is the supreme commander of harassment and violation of honor,” one placard read. Other posters declared that the military consists of “liars” — a reference to the Sunday edition of independent newspaper Al-Tahrir, the front page of which made the accusation next to a picture of the woman in the blue bra.

“I had to come after I saw the picture of the naked girl in the newspapers — the images were enough to make any respectable person come. I have daughters and I came for them,” Talat told Egypt Independent.

Like many of the protesters, Talat insisted that Tantawi must leave power and the SCAF hand over power to civilian rule.