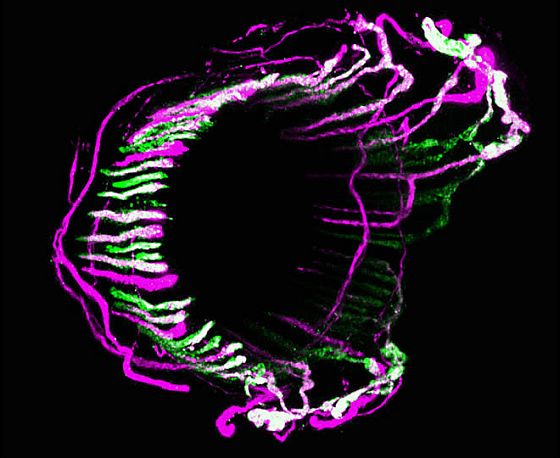 Wired reports on a study [PDF] mapping tactile neurons, co-authored by Jeff Woodbury of the University of Wyoming: To untangle the wiring, Woodbury and other researchers led by neuroscientist David Ginty of Johns Hopkins University began with mouse nervous systems. They focused on a class of nerve endings called low-threshold mechanosensory receptors, or LTMRs, which are sensitive to the slightest of sensations: a mosquito’s footsteps, a hint of breeze.

The researchers identified genes active only in types of LTMRs at the base of ultra-sensitive hairs. Then, in mouse embryos, they tagged those genes with fluorescent proteins. The result: an engineered mouse strain illuminating the full, precise paths of LTMR cells.

Under a microscope, the researchers tracked three different types of LTMRs in never-before-seen detail, plus a fourth well-studied type. “This enabled us, for the first time, to nail down and tie specialized nerve endings to functions,” Woodbury said.

By following LTMRs all the way into ganglia and out the other side into the spinal cord, the researchers discovered a layering pattern that resembles the organization of neurons in the cerebral cortex — the outermost layer of the brain with major roles in consciousness, memory, attention and other roles.

With four of the two dozen different nerve ending types now traceable, the researchers are now working to tag the rest. Someday, perhaps, their technique could lead to complete neural maps of touch.