How does a senior U.S. intelligence official tell a Washington Post reporter that the administration’s goal in imposing sanctions on Iran is to bring about regime change, if that is not in fact the goal?

The article (cached version) with this headline (which was later substantially re-written) begins: 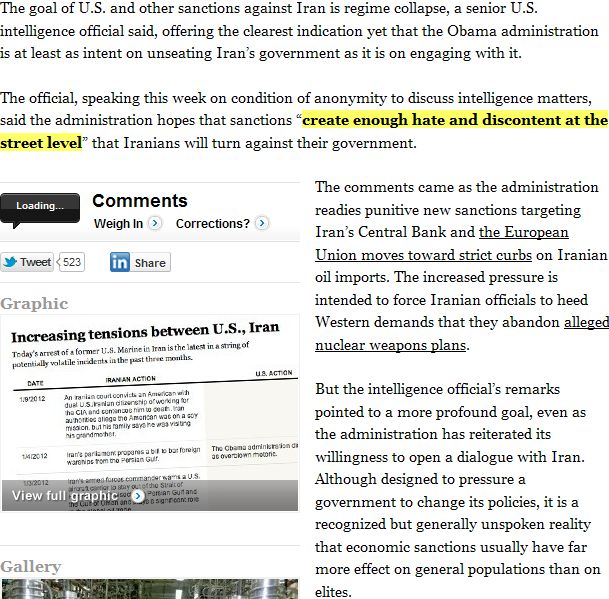 The revised version of the article, under a revised headline, “Public ire one goal of Iran sanctions, U.S. official says”, begins:

The Obama administration sees economic sanctions against Iran as building public discontent that will help compel the government to abandon an alleged nuclear weapons program, according to a senior U.S. intelligence official.

In addition to influencing Iranian leaders directly, the official said, “another option here is that [sanctions] will create hate and discontent at the street level so that the Iranian leaders realize that they need to change their ways.”

The intelligence official’s remarks pointed to what has long been an unstated reality of sanctions: Although designed to pressure a government to change its policies, they often impose broad hardships on a population.

So who would this senior intelligence official be? CIA director David Petraeus? And was he misquoted? Or was he being too candid? Or is the Washington Post colluding with the administration in sending out a mixed message?