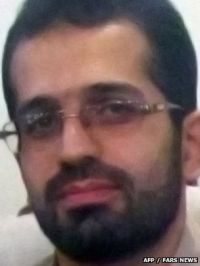 An Iranian university professor and deputy director at Natanz enrichment facility was killed in a terrorist bomb blast in a Northern Tehran neighborhood on Wednesday morning, the Fars News Agency reports.

Some guy says this was a joint operation carried out by Mossad and the Iranian terrorist group, Mujahideen-e Khalq (MEK) — though when I say “some guy,” if that’s taken to imply that the source of this information is a man, I am perhaps being too specific.

Richard Silverstein heard about the Mossad-MEK connection from his “own confidential Israeli source.” This attribution of responsibility for the attack may indeed be accurate, but to describe a source no more specifically than to say that this source is an “Israeli” tells us next to nothing. It does however allow newspaper journalists to repeat this “information” as though it was news. Hence the Fars News Agency itself repeats Silverstein’s claim and tries to boost his credibility by describing him as “a senior Jewish American journalist.” Israel’s Ynet plays the same game, though with the embellishment that Silverstein’s source has been elevated to a “senior Israeli source.”

Having said all that, it seems reasonable to assume that this attack — an attack that were it to take place anywhere outside Iran would widely be described as a terrorist attack — was conducted with the direct or indirect involvement of the Israeli and/or United States governments.

One of the strange ethical anomalies of the era in which we live is that an American president willingly accepts responsibility for authorizing assassinations conducted by special forces or drone-launched Hellfire missiles, even though in both types of operation the target may be mistaken and innocent bystanders frequently get killed, yet no government official is willing to claim responsibility for a cold-blooded murder. For the killing to be legitimized it has to given the legal pretext that it is being conducted on a “battlefield” during a “war.”

For as long as the streets of Tehran are not regarded as a battlefield and neither the United States nor Israel is officially at war with Iran, no one will acknowledge that a campaign of state terrorism is indeed being waged, since to do so would be offer an open invitation for Iran to respond in kind.

Today’s attack “comes in the middle of heightened tensions and it helps Iran to play on a sense of threat that it is under a lot of pressure,” Gala Riani, a Middle East analyst at London-based forecaster IHS Global Insight, said by telephone. “It can also be beneficial to more extremist elements in the government who are supporting further military drills in the Strait of Hormuz.”

Iran conducted naval exercises near the Strait of Hormuz for 10 days that ended early this month.

Previous attacks against Iranian nuclear scientists include the assassination of Massoud Ali-Mohammadi, killed by a bomb outside his Tehran home in January 2010, and an explosion in November of that year that took the life of Majid Shahriari and wounded Fereydoun Abbasi-Davani, who is now the head of Iran’s Atomic Energy Organization.

Oil pared losses of as much as 0.6 percent after the report on Roshan’s death. Crude for February delivery was at $102.25 a barrel, up 1 cent, in electronic trading on the New York Mercantile Exchange at 4:06 p.m. Singapore time.

“While it is difficult to gauge the impact of the scientists’ deaths on the country’s nuclear development, Iranian officials have already acknowledged they have a human-resources problem in the program largely because of the sharp political differences within the country,” Meir Javedanfar, lecturer on Iranian politics at the Herzliya Interdisciplinary Center in Israel, said in a telephone interview.

8 thoughts on “Another nuclear scientist assassinated in Tehran”