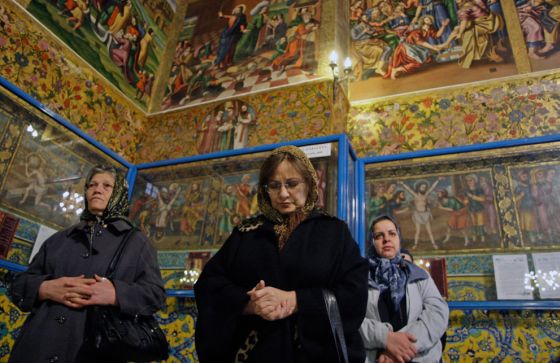 Hooman Majd writes: The ransacking of the British embassy capped an annus horribilis for the Iranian leadership. Throughout the year, the supreme leader, Ayatollah Ali Khamenei, Ahmadinejad, and every politician in between have seemingly been at odds with each other over just about every possible matter of state. The result is an uncertainty and nervousness among officials, and a kind of political paralysis in which it has become hard for people to know exactly who is in charge, or even whom to blame for policy gone bad. But it was also a terrible year for the Iranian people. They are baffled by the West’s approach to dealing with their country’s nuclear program — the stated aim is a change in policy, but the result is only general hardship. Big-city dwellers complain about rampant inflation, a strangled economy, and general inconvenience on a daily basis.

On the street, nowhere is the impact more evident than at any one of the many foreign exchange bureaus where Iranians gather to monitor the flat screens that show the almost minute-by-minute slide in the rial. Men and women gather at the kiosks to buy dollars as a hedge against crippling inflation; many think that the government will soon run out of greenbacks as international sanctions clinch Iranian banks. The country’s financial culture is cash — there are no credit cards — and the government routinely pumps hundred-dollar bills into circulation in an effort to keep the currency stable. The strategy has backfired. By the end of last year, confidence that the regime could withstand international financial pressure — particularly after the British government cut all financial ties with Tehran — had sunk to an all-time low.

By December, escalating talk of military strikes, promoted by respectable Western and Israeli politicians, analysts, and commentators — in the pages of this journal, too — raised anxieties in Tehran to a level not witnessed in many years. In years past, war over the nuclear program had always been the subject of chatter in Iran, but few took it very seriously. In fact, if war came up in ordinary conversation, it was mentioned jokingly. In December, however, my optician, an older Isfahani with a wry sense of humor who hosts a salon of sorts with locals every evening in his shop, captured the mood of the city when he said of the worry over a coming war, “You can smell it,” he said. “This time, you can smell it.”

If you live in Iran it is hard to imagine what the West, particularly the United States, is trying to accomplish. No one doubts that Israeli and Western operators are behind recent assassinations of nuclear scientists on the streets of Tehran. And the sudden frequency of “accidents” at various factories and Revolutionary Guards bases (which a majority — their government’s denial notwithstanding — also believe are the work of foreign agencies) has done nothing to change the minds of either government officials or the general public about the nuclear program.

Few in Iran believe that the nuclear program is a quest for a Shia bomb to obliterate Israel once and for all. No, the Iranian people, from my greengrocer to college students who resent their government, still consider the nuclear question in generally nationalistic terms. The particular regime in power is of passing relevance. So sanctioning Iran’s central bank and embargoing Iranian oil, tactics the White House may be using as a way to avoid having to make a decision for war, will neither change minds in Tehran nor do much of anything besides bring more pain to ordinary Iranians. And making life difficult for them has not, so far, resulted in their rising up to overthrow the autocratic regime, as some might have hoped in Washington or London.