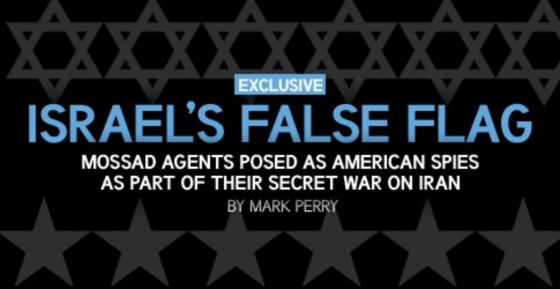 In an exclusive report for Foreign Policy magazine, Mark Perry reveals that Mossad agents have been posing as CIA officers and recruiting members of the terrorist organization Jundallah to fight Israel’s covert war against Iran.

Buried deep in the archives of America’s intelligence services are a series of memos, written during the last years of President George W. Bush’s administration, that describe how Israeli Mossad officers recruited operatives belonging to the terrorist group Jundallah by passing themselves off as American agents. According to two U.S. intelligence officials, the Israelis, flush with American dollars and toting U.S. passports, posed as CIA officers in recruiting Jundallah operatives — what is commonly referred to as a “false flag” operation.

The memos, as described by the sources, one of whom has read them and another who is intimately familiar with the case, investigated and debunked reports from 2007 and 2008 accusing the CIA, at the direction of the White House, of covertly supporting Jundallah — a Pakistan-based Sunni extremist organization. Jundallah, according to the U.S. government and published reports, is responsible for assassinating Iranian government officials and killing Iranian women and children.

But while the memos show that the United States had barred even the most incidental contact with Jundallah, according to both intelligence officers, the same was not true for Israel’s Mossad. The memos also detail CIA field reports saying that Israel’s recruiting activities occurred under the nose of U.S. intelligence officers, most notably in London, the capital of one of Israel’s ostensible allies, where Mossad officers posing as CIA operatives met with Jundallah officials.

The officials did not know whether the Israeli program to recruit and use Jundallah is ongoing. Nevertheless, they were stunned by the brazenness of the Mossad’s efforts.

“It’s amazing what the Israelis thought they could get away with,” the intelligence officer said. “Their recruitment activities were nearly in the open. They apparently didn’t give a damn what we thought.”

The CIA and the White House were both asked for comment on this story. By the time this story went to press, they had not responded. The Israeli intelligence services — the Mossad — were also contacted, in writing and by telephone, but failed to respond. As a policy, Israel does not confirm or deny its involvement in intelligence operations.

There is no denying that there is a covert, bloody, and ongoing campaign aimed at stopping Iran’s nuclear program, though no evidence has emerged connecting recent acts of sabotage and killings inside Iran to Jundallah. Many reports have cited Israel as the architect of this covert campaign, which claimed its latest victim on Jan. 11 when a motorcyclist in Tehran slipped a magnetic explosive device under the car of Mostafa Ahmadi Roshan, a young Iranian nuclear scientist. The explosion killed Roshan, making him the fourth scientist assassinated in the past two years. The United States adamantly denies it is behind these killings.

The report then made its way to the White House, according to the currently serving U.S. intelligence officer. The officer said that Bush “went absolutely ballistic” when briefed on its contents.

“The report sparked White House concerns that Israel’s program was putting Americans at risk,” the intelligence officer told me. “There’s no question that the U.S. has cooperated with Israel in intelligence-gathering operations against the Iranians, but this was different. No matter what anyone thinks, we’re not in the business of assassinating Iranian officials or killing Iranian civilians.”

Israel’s relationship with Jundallah continued to roil the Bush administration until the day it left office, this same intelligence officer noted. Israel’s activities jeopardized the administration’s fragile relationship with Pakistan, which was coming under intense pressure from Iran to crack down on Jundallah. It also undermined U.S. claims that it would never fight terror with terror, and invited attacks in kind on U.S. personnel. [Continue reading…]