The Israeli Occupation Archive interviews Haneen Zoabi, a Palestinian member of Israel’s parliament who became known around the world after her participation in the Gaza Flotilla aboard the MV Mavi Marmara. 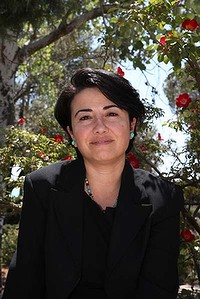 During the past year, a series of ethnocentric and other legislative initiatives were introduced in the Knesset, designed to define loyalty to the state as Jewish; severely penalize participation in non-violent BDS actions against the occupation; enable discrimination in housing and access to land via “Admission Committees” that can bar Palestinian Israelis from residing in hundreds of communities to keep them exclusively Jewish; punish NGOs that protect the civil rights of citizens by limiting or taxing international funding sources they depend on; limit the press; influence the Supreme Court; and more.

HZ: First of all, the situation of the Palestinians in Israel is not new. I don’t agree with the [Israeli] left’s description that we are moving from a democratic to a fascist state. It is a gradual continuation of long-standing policies that confiscated my land; that discriminate against me; and that refuse to recognize me as an equal citizen and as one of the owners of this homeland.

The problem is not simply the terms of citizenship: We want to be equal to the Jews, but also, as the indigenous people, this homeland belongs to us. I want to be equal not because I immigrated or because I’m a citizen. Primarily I want to be equal because it is my homeland and nobody has the right to take it away. And when I ask for this kind of equality, not as an immigrant but as a member of the indigenous people, as the owner of this land, then I am already making a compromise, making a huge compromise. In this context, just asking for equality with the Jews is a compromise.

The state really believed it could be Jewish and democratic, and defended Israel as though there was no contradiction between the values of Jewishness and democracy. When many years ago my party [the National Democratic Assembly] started pointing out that there was a contradiction between the two, its arguments seemed to many to be dangerous. We found ourselves defined as a “strategic threat.” Israelis and the world would say: What’s the contradiction? Others – the Shin Bet, the domestic intelligence service, and mainstream politicians – would say that this undermines Israel as a “Jewish and democratic state.”

Now, even Israeli policy-makers understand the problem. These [anti-democratic] laws have forced some of the Knesset members to say, “If there’s a contradiction between Jewish values and democratic values, we prefer the Jewish values.” Now it’s not even a question of which value they prefer, it’s clear they prefer to be Jewish over being democratic.

Now, this is a new reality, not just a continuation of the [old] policies of racism and Judaization. Israeli Jews don’t hesitate now to say “We prefer the Jewish values,” and they are willing to use these values to justify discrimination, racism and treating Palestinian citizens as a strategic threat.

Because, if Jewish values are at the core of policy – and this obsession with the Jewishness of the state is part of a new political culture – and we are not Jewish, and we will not give up our rights, then obviously we present not just an alternative view, but something that contradicts the state’s very legitimacy: not the religious aspects, but the political aspects, meaning Zionism. Because Jewishness here means Zionism, not Judaism. It is misleading to talk about a Jewish and democratic state; it is a Zionist state. Because we are challenging these policies, it has become natural to say that our struggle, our very existence, is threatening the state. This is new.

1 thought on “Interview with Haneen Zoabi”