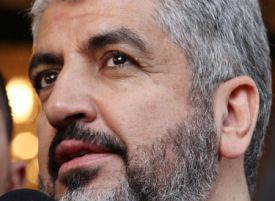 The Guardian reports: Khaled Meshaal, the political head of Hamas, is to step down from his position when elections for the leadership of the Palestinian Islamist organisation take place in the next few months.

A statement from Meshaal’s office said the Damascus-based leader would not seek re-nomination after 16 years at the helm, but would continue to serve the movement. It followed reports of the move earlier this week.

Meshaal has indicated in recent weeks that Hamas should make a strategic departure from armed struggle to popular non-violent resistance in the wake of the Arab spring revolutions and the success of Islamist parties in elections.

The new approach caused a rift with the internal Gaza leadership, which said there would be no change in Hamas policy. “There has been no change concerning our mode of thinking towards the conflict,” Mahmoud Zahar, the most senior Hamas figure inside Gaza, told the Guardian in an interview this month.

Meshaal’s decision to step down may indicate that the Hamas leadership within Gaza has won a power struggle.

Meshaal had also been pushing for Palestinian reconciliation and the formation of a national unity government ahead of elections. However, he was reported to be frustrated with the slow and uncertain progress, and few observers believe elections will take place this year.

The Hamas leader was also looking for a new base for the organisation amid the ongoing revolt in Syria. Hamas had refused to back the regime of the Syrian president, Bashar al-Assad, infuriating the Iranian government, which had sponsored both it and the Syrian leadership.