Amal Hanano writes: Another early morning in Baba Amr, another late night here. My plan is to write a simple post from a few reports on the day’s events in Homs, the fifth consecutive day of shelling in Baba Amr. Keeping an eye on Skype and Twitter and my ears tuned in to Omar Shakir’s livestream broadcast, I begin, intending to finish quickly with the goal of sleeping earlier than the last four nights. Omar’s livestream is calm. The quiet moments before dawn are punctuated by chirping birds and soon after by the crowing rooster of Baba Amr, whose crows have now been heard across the world. I hear a booming noise in the distance every now and then. They have become part of Baba Amr’s everyday soundtrack, as normal as the calls of the rooster.

People tweet that it seems more peaceful, that the sounds of shelling are less intense. Then I notice Omar’s latest tweets, in Arabic with no hashtags, just cries of pure desperation. I sense this is Omar the person speaking not the citizen journalist. I know something was terribly wrong. A few moments later, we find out what it was. A different livestream camera had been targeted with a missile. People watched as the screen turned gray with smoke then black. The feed is dead. So are the five people who were manning the camera, including two women. I realize that Omar had been tweeting about witnessing the explosion of his friends, “A street strewn with limbs. People have become limbs. We have no one but you, God.”

Five dead quickly become twenty-nine and another fifty-five wounded. My fresh reports from an hour ago are now obsolete. Baba Amr is under attack. Again.

As I read Omar’s tweets and watch his videos, Jaafar, an activist in Daraa, messages me on Skype, “I need you to connect me to someone from the media to speak to a doctor in Homs.” I tweet, many kind people retweet, and we wait. He sends me another message, “I want television coverage not an article.” I wasn’t about to start arguing or tell him that beggars can’t be choosers. But truth is, no one is contacting me. So I call him and tell him I want to speak to the people in Baba Amr myself. He says reluctantly, “For an article?” “Yes, Jaafar,” I say, holding my tongue, “For an article.” He says, “Okay.” Moments later we’re on the call.

I speak to Yousef (whose name has been changed for his protection), an activist in Baba Amr who was assisting the doctor. The doctor was at another makeshift field hospital taking care of the wounded. Yousef recounts this morning’s events.

“The shelling started at 5 a.m. There are four families buried under the rubble of their homes. The rockets tear through one side of a house and penetrate through the walls into the next. At night, the shelling is less frequent but the snipers are everywhere, targeting every moving object. If people leave their homes to get food or anything, the snipers are ready. Almost fifty percent of the homes in Baba Amr are destroyed. Four days before the shelling, Baba Amr was cut off from the rest of the city. Cut off from bread and food. There is no food. When the Red Crescent entered, the army took all their supplies before letting them in. And they didn’t allow them to take any wounded out. What did we get out of the Red Crescent without supplies?” As we speak I can hear the pounding explosions in the background. Planes are circling over Baba Amr, launching missiles into buildings filled with people.

Journalists are responding now. I connect each one to Jaafar. He’s like a media traffic controller, efficient and precise. I listen to him typing while he talks, ordering activists to be ready to speak, in English and Arabic. Each time I send him a name of someone who is interested in an interview, he messages me within one second, “television or newspaper?” He says, “I want people to listen to the explosions, to see with their eyes, not just read about it. Reading about it is not good enough.” I smile to myself and respond dutifully: newspaper, newspaper, radio. The radio interview makes him happier, and for some reason that makes me as well.

I listened in to the calls with the journalists. I could tell Yousef was getting frustrated. When they ask for the number of dead, Yousef repeats, “Twenty-nine. No, not in the last twenty-four hours, the last four hours.” Later, a reporter asks, “What is the condition of the hospital?” He answers, “There are no hospitals. We’ve made our homes into hospitals. We are treating our wounded in the mosque.” She asks again, “Where is the hospital?” He replies in a clipped tone, “It’s not a hospital. It’s a mosque.” 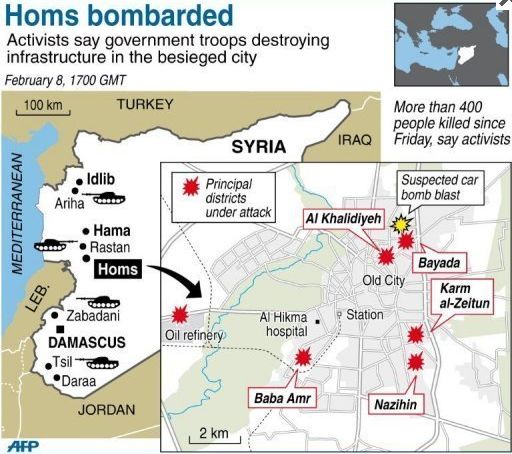 3 thoughts on “An SOS from Baba Amr, Homs”