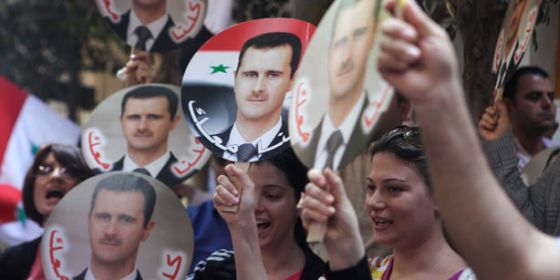 Al Ayyam reports: Pro-Assad rallies. The epitome of a civilized rally. The balloons, the flags, the dancing everyone happy and singing their praises to a supreme leader, denouncing violence and sectarianism. It’s a utopia of free speech and unwavering support. It is the example the Assad regime points to for proof of their success at ruling the country. It is a far cry from the tear gas, bullets and indeed heavy artillery that rain down on protests in other parts of the country. Proof, the government says, that these other protests are not peaceful at all, that they are, in fact, armed gangs paid for and financed from a number of external forces.

Activists have long claimed pro-Assad rallies are fabricated, that if one were to look closer the crowds are made up of the secret police or moukhabarat and a few die-hard loyalists. That these are planned in advance, funded by the regime no less and are not, as the government claims, spontaneous showcases of love and adoration.

It seems the devil truly is in the detail. The hacktivist syndicate Anyonymous recently dumped emails from MOPA, the Ministry of Presidential Affairs, President Assad’s personal office. Emails uncovered sent to Presidential aid Akram Issa, detail billings and accounts and efforts made in advance to create these spontaneous rallies in support of the President.

The email in question marked SPAM in the subject header, states Governors involved offered their verbal commitment to pay the supplier of these protests yet have not paid up their dues as per the Minister’s request. Attachments in the email detail itemized descriptions of the outstanding balance, which reach a total of 1.1 Million SYP in October 2011 (before the inflation of the SYP) at the time equaling $20,000.

The rally in Lattakia province alone cost the administration 315,000 SYP the bare minimum, the supplier writes, to make the rally seem like an acceptable turnout.

In another attachment titled “Detailed billings to the personal account of Monhal Zeitoun” [PDF] costs for rallies held in Damascus, Sweida and Hasakeh province are itemized. The supplier writes under the header for Damascus “Campaign: Our martyrs, your blood runs in our veins” and details expenditures of 150,000 SYP ($2,600) to cover sound and broadcast of the event including another 49,000 SYP ($875) for printed t-shirts. A miscellaneous amount of 57,000 SYP includes costs for ironing clothes, supply of water, taxi cabs and a refrigerator and its transport.

At a time when cities and towns were surrounded by regime tanks and protesters died on the streets by army bullets, when heating oil in Homs was scarce and when international opinion towards the regime came into question the President’s office was gearing up for a fanfare of pomp and circumstance in an effort almost too bureaucratic to believe to prove their support is indeed a spontaneous act of love sheltered in the heart of every Syrian.