That’s a misleading headline. And so is this: 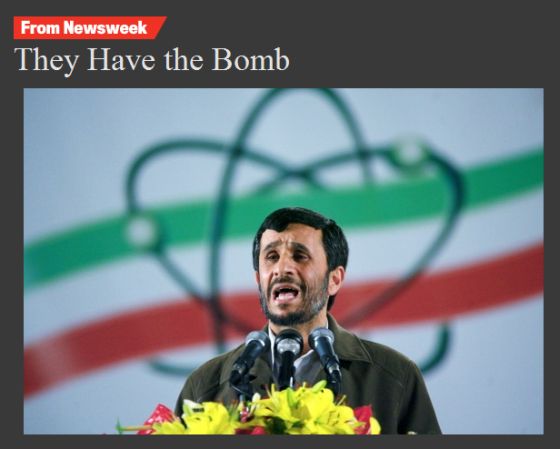 This is the first image in a Newsweek/Daily Beast gallery on "Nations in the nuclear club".

The caption to the right of this photo of Iran’s President Mahmoud Ahmadinejad reads: “At left, the the [sic] reactor building of the Bushehr nuclear power plant in October 2010.” But in order to see the image of Bushehr, the reader needs to click to the next image and then click back to the previous. So, when readers click through to the gallery from the Newsweek feature article, “Obama’s Dangerous Game With Iran,” the first image they are presented with is Ahmadinejad under the headline, “They Have the Bomb.”

Update: Without any explanation for the earlier presence of the Ahmadinejad photo shown above, Newsweek now has Bushehr as the opening image in this gallery. Nevertheless, the headline, “They Have the Bomb,” and beneath that an image of an Iranian nuclear reactor, is still misleading.