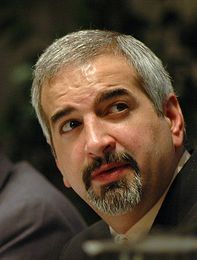 The New York Times reports: Anthony Shadid, a gifted newspaper correspondent whose graceful dispatches for both The New York Times and The Washington Post covered nearly two decades of Middle East conflict and turmoil, died, apparently of an asthma attack, on Thursday while on a reporting assignment in eastern Syria. Tyler Hicks, a Times photographer who was with Mr. Shadid, carried his body across the border to Turkey.

Mr. Shadid, 43, had been reporting inside Syria for a week, gathering information on the Free Syrian Army and other armed elements of the resistance to the government of President Bashar al-Assad, whose military forces have been engaged in a harsh repression of the political opposition in a conflict that is now nearly a year old.

The Syrian government, which tightly controls foreign journalists’ activities in the country, had not been informed of his assignment by The Times.

The exact circumstances of Mr. Shadid’s death and his precise location inside Syria when it happened were not immediately clear.

But Mr. Hicks said that Mr. Shadid, who had asthma and had carried medication with him, began to show symptoms as both of them were preparing to leave Syria on Thursday, and the symptoms escalated into what became a fatal attack. Mr. Hicks telephoned his editors at The Times, and a few hours later he was able to take Mr. Shadid’s body into Turkey.

Jill Abramson, the executive editor, informed the newspaper’s staff Thursday evening in an e-mail. “Anthony died as he lived — determined to bear witness to the transformation sweeping the Middle East and to testify to the suffering of people caught between government oppression and opposition forces,” she wrote.

The assignment in Syria, which Mr. Shadid arranged through a network of smugglers, was fraught with dangers, not the least of which was discovery by the pro-government authorities in Syria. The journey into the country required both Mr. Shadid and Mr. Hicks to travel at night from Turkey to a mountainous border area adjoining Syria’s Idlib Province, where the demarcation line is a barbed-wire fence. Mr. Hicks said they squeezed through the fence’s lower portion by pulling the wires apart, and guides on horseback met them on the other side. It was on that first night, Mr. Hicks said, that Mr. Shadid suffered an initial bout of asthma, apparently set off by an allergy to the horses, but he recovered after resting.

On the way out a week later, however, Mr. Shadid suffered a more severe attack — again apparently set off by proximity to the horses of the guides, Mr. Hicks said, as they were walking toward the border. Short of breath, Mr. Shadid leaned against a rock with both hands.

“I stood next to him and asked if he was O.K., and then he collapsed,” Mr. Hicks said. “He was not conscious and his breathing was very faint and very shallow.” After a few minutes, he said, “I could see he was no longer breathing.”

Mr. Hicks said he administered cardiopulmonary resuscitation for 30 minutes but was unable to revive Mr. Shadid.

The death of Mr. Shadid, an American of Lebanese descent who had a wife and two children, abruptly ended one of the most storied careers in modern American journalism. Fluent in Arabic, with a gifted eye for detail and contextual writing, Mr. Shadid captured dimensions of life in the Middle East that many others failed to see. Those talents won him a Pulitzer Prize for international reporting in 2004 for his coverage of the American invasion of Iraq and the occupation that followed, and a second Pulitzer in 2010, also for his Iraq reporting. He also was a finalist in 2007 for his coverage of Lebanon, and has been nominated by The Times for his coverage of the Arab Spring uprisings that have transfixed the Middle East for the past year.

In December, during a brief break from reporting in the Middle East, Shadid was interviewed by Terry Gross and reflected on the Arab Spring.