Bloomberg reports: An American reporter working for the U.K.’s Sunday Times and a French photographer were killed in the besieged Syrian city of Homs when shells hit them while they were reporting from the city, French officials said.

The journalists were Marie Colvin and photographer Remi Ochlik, Valerie Pecresse, budget minister and spokeswoman for France’s government, told journalists in Paris. They were killed during a bombardment of the Baba Amr residential neighborhood of the city by forces loyal to President Bashar al-Assad, the U.K.- based Syrian Observatory for Human Rights said in an e-mailed statement.

Neil MacFarquhar writes: Marie Colvin recognized the significant story unfolding in the rebellious Syrian city of Homs. The problem was how to get at it.

She had been hoping for an official visa to visit Damascus, but with none forthcoming, she decided to sneak over the border despite strong misgivings about her safety in the besieged city suffering a constant battering from government tanks and heavy artillery.

“I cannot remember any story where the security situation was potentially this bad, except maybe Chechnya,” Ms. Colvin told me over a dinner of traditional Lebanese fare on her last night in Beirut a week before she was killed in Homs.

In her first dispatch from that besieged city, printed in the latest Sunday Times of London, she detailed the dangers in merely reaching her destination, which lies just across the Lebanese border but now exits in a grim, deadly world apart. Her welcoming party was ecstatic that a foreign reporter had braved the odds to reach them.

“So desperate were they that they bundled me into an open truck and drove at speed with the headlights on, everyone standing in the back shouting “Allahu akbar” — God is the greatest,” she wrote. “Inevitably, the Syrian army opened fire.”

She then transferred into a small car which was again fired upon, speeding into a row of abandoned buildings for cover.

But she found her story.

She described the “widows’ basement” crammed with women cowering in the only shelter they could find in a city where there is only sugar and water to feed a newborn baby.

“Among the 300 huddling in this wood factory cellar in the besieged district of Baba Amr is 20-year-old Noor, who lost her husband and her home to the shells and rockets,” Ms Colvin wrote, etching in stark detail how the woman’s husband and brother died when they went out into the streets to forage for food.

“It is a city of the cold and hungry, echoing to exploding shells and bursts of gunfire,” she wrote, her overall description evoking some of the worst sieges of World War II. There are no telephones and the electricity has been cut off.”

“Few homes have diesel for the tin stoves they rely on for heat in the coldest winter that anyone can remember,” the story said. “Freezing rain fills potholes and snow drifts in through windows empty of glass. No shops are open, so families are sharing what they have with relatives and neighbors. Many of the dead and injured are those who risked foraging for food.

In an address she gave in London in 2010, Colvin said:

Covering a war means going to places torn by chaos, destruction, and death, and trying to bear witness. It means trying to find the truth in a sandstorm of propaganda when armies, tribes or terrorists clash. And yes, it means taking risks, not just for yourself but often for the people who work closely with you.

Despite all the videos you see from the Ministry of Defense or the Pentagon, and all the sanitized language describing smart bombs and pinpoint strikes, the scene on the ground has remained remarkably the same for hundreds of years. Craters. Burned houses. Mutilated bodies. Women weeping for children and husbands. Men for their wives, mothers children.

Our mission is to report these horrors of war with accuracy and without prejudice. 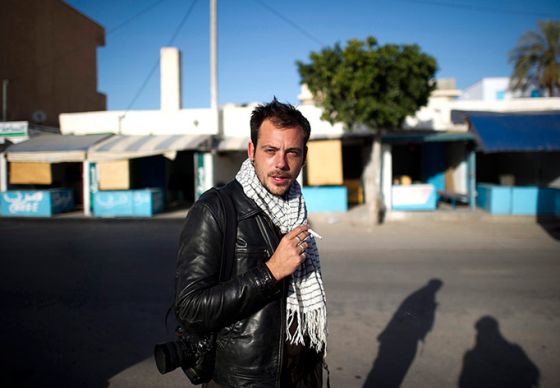 The Guardian reports: Remi Ochlik, 28, who has been killed in Homs alongside the veteran war reporter Marie Colvin, was an award-winning French photojournalist, considered one of the biggest talents of a new generation of photographer-reporters.

Last month he won a World Press Photo award for Battle for Libya, his series from the Libyan uprising.

Born in Lorraine in the east of France, Ochlik had always wanted to be a war photographer. He made his name aged 20 while he was still in photography college in Paris when he went to Haiti in 2004 to document the riots and bloody conflict surrounding the fall of the president Jean-Bertrand Aristide. He won a prestigious award for young reporters and later co-founded his own photography agency, IP3 Press, which covered both foreign news and French politics. In 2008, he covered war in the Democratic Republic of Congo and returned to Haiti in 2010 to document the cholera epidemic.

In 2011, he covered the Arab Spring in Tunisia, Egypt and Libya, publishing work in Paris Match, Le Monde, Time magazine and the Wall Street Journal. Last December his work from the Arab Spring won a major award in Lille.

Jean-Francois Leroy, head of Visa pour l’Image, France’s big international photojournalism festival, had shown Ochlik’s early work from Haiti, saying of him at the time: “Someone showed me this work on the events in Haiti. It was very beautiful, very strong. I didn’t know the guy who’d done it. I asked him to come in. He’s called Remi Ochlik, he’s 20. He worked all alone, like a big guy. There you go. Photojournalism is not dead.”