The Washington Post reports: When the crew of the Virginia scallop trawler Cinmar hauled a mastodon tusk onto the deck in 1970, another oddity dropped out of the net: A dark, tapered stone blade, nearly eight inches long and still sharp. 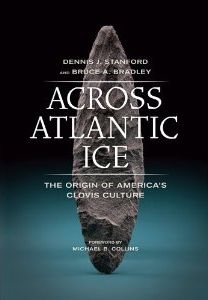 Forty years later, this rediscovered prehistoric slasher has reopened debate on a radical theory about who the first Americans were and when they got here.

Archaeologists have long held that North America remained unpopulated until about 15,000 years ago, when Siberian people walked or boated into Alaska and down the West Coast.

But the mastodon relic turned out to be 22,000 years old, suggesting the blade was just as ancient.

Whoever fashioned that blade was not supposed to be here.

Its makers likely paddled from Europe and arrived in America thousands of years ahead of the western migration, argues Smithsonian Institution anthropologist Dennis Stanford, making them the first Americans.

“I think it’s feasible,” said Tom Dillehay, a prominent archaeologist at Vanderbilt University. “The evidence is building up and it certainly warrants discussion.”

At the height of the last Ice Age, Stanford says, mysterious stone-age European people known as the Solutreans paddled along an ice cap jutting into the North Atlantic. They lived like Inuits, harvesting seals and seabirds.

The Solutreans eventually spread across North America, Stanford argues, hauling their distinctive blades with them.

When Stanford proposed this “Solutrean hypothesis” in 1999, colleagues roundly rejected it. One prominent archaeologist suggested Stanford was throwing his career away.

But now, 13 years later, Stanford and Exeter University archaeologist Bruce Bradley lay out a detailed case – bolstered by the curious blade and other stone tools recently found in the mid-Atlantic – in a new book, Across Atlantic Ice.

“I drank the Solutrean Kool-aid,” said Steve Black, an archaeologist at Texas State University in San Marcos. “I had been very dubious. It’s something a lot of [archaeologists] have dismissed out of hand. But I came away from the book feeling like it’s an extremely credible idea that needs to be taken seriously.”