Rory Stewart reviews America and the Imperialism of Ignorance: US Foreign Policy Since 1945, by Andrew Alexander. 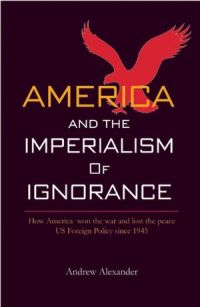 What was the Cold War? For Professor John Lewis Gaddes, it was a conflict between two incompatible systems, democracy and communism, each with a different vision of liberty and human purpose. The result was a potential third world war, in which we risked being crushed by dictators or destroyed by nuclear weapons. And the US saved us. ‘The world,’ he writes, ‘I am quite sure, is a better place for the conflict having been fought in the way that it was and won by the side that won it. For all its dangers, atrocities, costs, distraction and moral compromises, the Cold War was a necessary contest.’

Andrew Alexander disagrees. And Alexander — who has long exposed the myopia and self-deception of the establishment — should be taken seriously. He argued against the Vietnam War, took on prices and incomes policy, the fixed exchange rate and the ERM [European Exchange Rate Mechanism], and continued by opposing the interventions in Iraq and Afghanistan. In almost every case, he stood against the received wisdom of the Financial Times, the Economist, the CBI [Confederation of British Industry], and (though they always printed his pieces) his editors at the Daily Mail.

In almost every case he was right. Now, he argues, in relation to the Cold War, that ‘the world is a much more dangerous place, as a result of America’s determination to save it.’ It is difficult to imagine a more important thesis. As he writes:

If the world came close to nuclear Armageddon on half a dozen occasions, and expended so much blood and treasure for 40 years against a threat that was never real, this raises serious doubt about the integrity and basic intelligence of a whole succession of Western governments and the political institutions for which they make such high claims.

Alexander argues that communism never posed an existential threat to the security of the West. Stalin’s primary aim was the preservation of his regime, and his only objective in Eastern Europe was to create a defensive buffer against any German advance. Not only did he lack the resources, the plans or the will to conquer Western Europe: he actively opposed communist revolutions around the world. If Western Europe was safe from Soviet attack, the United States — thousands of miles further away — was even safer. Nevertheless, an entire US policy industry emerged to argue the opposite, and to produce the most ingenious explanations of why a country like distant Vietnam could be, as Ronald Reagan claimed in 1963, ‘the greatest threat that ever faced humankind in its climb from the swamp to the stars.’

Alexander offers no single explanation for this obsession. Instead he patiently illustrates a dozen factors in the hypnotising, extravagant project. His account of Woodrow Wilson’s peculiar rigidities and self-defeats at the Paris Peace Conference in 1919, and the US involvement in the Philippines and Cuba, suggests that US foreign policy was, for a century, less an instrument of democracy and more a form of eccentric imperialism. Unlike British policy, which was based on unwritten assumptions about the joy, responsibility and honour of imperial government, the US approach reflected a distaste for empire, and a worship of its own written constitution, and law, enlivened by acts of startling gangsterism.

Unlike British political officers, US officers were obsessed with the idea of human equality and freedom, but had little interest in, or attraction to alien cultures. Generals had a disproportionate influence on policy and frequently became presidents or secretaries of state. The resulting policy, from Vietnam to Iraq, could be both high-minded and bluntly brutal.

The Cold War fears of Russia were elaborated by the defence industry, and the military, to justify their programmes, their budgets, and their losses. And they were further intensified by electoral politics, and the temptation in Senator Vandenberg’s advice to Truman to sell international aid by ‘scaring the hell out of the American people’. But it was not simply a conspiracy of defence contractors: as Alexander, (whose time as a parliamentary sketch-writer has left him with a singular sensitivity to the character of politicians) observes: ‘The effect of propaganda … is often greater on those who propound it than on the public which receives it. The messengers become prisoners of their own propaganda.’

In Alexander’s view, the US fight against this misconceived and exaggerated threat was harmful. US leaders assumed that any ‘appeasement’ would encourage Soviet expansion, whereas, in fact, the most dangerous Soviet actions were provoked by US assertiveness. The Soviet Politburo, for example, preferred a non-communist Afghanistan, and was keen not to get involved on the ground. But the apparently strong US position in Pakistan and Iran, and the CIA ties to the Afghan president, ultimately convinced the Soviets that they had no alternative other than nervously to embark on the catastrophic invasion, which ultimately led, via a million deaths, to the horrors that continue to define Afghanistan today. It was not over-confidence but fear of US ambitions which drove Soviet policy. And, as Alexander demonstrates, almost every element of US policy for decades — including the Marshall plan, the Berlin airlift and its defence investment — further intensified the paranoia and aggression.

Alexander builds his case through quotes from primary sources, from National Security Council documents, speeches, telegrams, presidential letters and Soviet archives. His patient, understated discoveries are shocking. Here is a general, commenting on the Japanese: ‘When we knew we didn’t need to do it and they knew we didn’t need to do it, we used them as an experiment for two atomic bombs.’ [Continue reading…]

The cold war consumed trillions of dollars. Hundreds of thousands died in surrogate wars around the globe. The opportunity cost in poverty and disease, in growth foregone and democracy postponed, was awesome. The embattlement of eastern Europe, like that of today’s Islamist states, retarded its passage into economic and political maturity. The cold war was not a war of good against evil. It was ignorance so pernicious as to question “the integrity and basic intelligence” of those democratic institutions persuaded that they were under existential threat.

Where Alexander goes for broke is in showing how this ignorance is ongoing. With the end of the cold war – and the west’s later inept handling of Russia – the west’s craving for a necessary enemy has revived. For a decade after 1990, defence chiefs resorted to genocidal autocrats, drug lords and Balkan separatists to maintain their budgets, which duly dwindled. Then came 9/11 and a “clash of civilisations”. Bush and Blair won elections. Bankers lent money to generals, and the military-industrial complex refloated on an ocean of myth and mendacity.

The brainwashing was ubiquitous. No book, no argument, no evidence could dissuade any British cabinet from the belief that only a giant defensive armoury stood between it and a communist takeover, and now stands against an Islamist Armageddon. Hence the need to keep nuclear-armed submarines at sea, somehow to deter an unnamed “terrorist state”. Likewise, five of the original six Republican candidates for US president recently called for war with Iran for “posing a threat to the American people”. What threat?

I believe Alexander is right to seek explanation not in the realpolitik of international relations, but in the motives of democratic leaders. America’s belief in itself as the “greatest superpower the world has ever seen” led Lyndon B Johnson to impotent fury at being thrashed by “a raggedy-ass little country” – Vietnam. It led Washington lobbyists to protect defence spending, as Truman was advised, by “scaring the hell out of the American people”. Today, a similar self-delusion leads Washington and London to claim the right to drop bombs on anyone they find “unacceptable”.

1 thought on “America and the imperialism of ignorance”