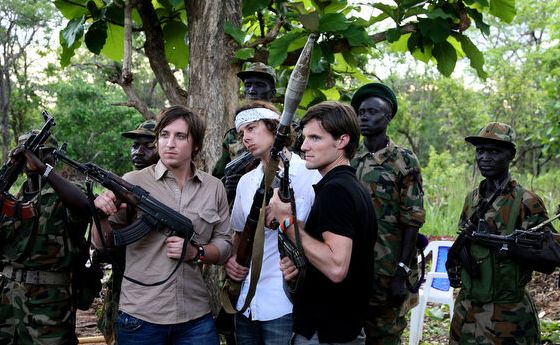 Invisible Children filmmakers pose with officers of the Sudan People’s Liberation Army on the Congo-Sudan border during failed peace talks between the LRA and the Ugandan Government, April 2008. Photo by Glenna Gordon.

Here’s how far behind the crest of the social media wave I ride: it wasn’t until last night that I heard about Kony2012. Google News had by that point insisted that this was the most important news in the world and so I tracked down the video. Mind you, just because something is spreading like a contagious disease (it’s “gone viral”) seems little reason to suppose it must be a good thing.

The New York Times takes a sip of the #StopKony Kool Aid:

Jason Russell said he never knew he was driving into a war zone. At 24, he had just graduated from the University of Southern California after studying film, he said, and was out looking for a story to tell.

Suddenly, he said, gunmen shot at the truck in front of him, and that is how he discovered the horrors wrought by Joseph Kony and his Lord’s Resistance Army. Mr. Russell would dedicate the next nine years of his life, often in obscurity, to making them a household name.

This week, in a testament to the explosive power of social media, he managed to do so in a matter of days, baffling diplomats, academics and Ugandans who have worked assiduously on the issue for decades without anything close to the blitz of attention that Mr. Russell and his tight-knit group of activists have generated.

Since being posted on Monday, their video, “KONY 2012,” has attracted more than 50 million views on YouTube and Vimeo, generating hundreds of thousands of dollars in donations on the first day alone and rocketing across Twitter and Facebook at a pace rarely seen for any video, let alone a half-hour film about a distant conflict in central Africa.

But is this a film about a distant conflict in central Africa?

While we are being told it’s all about the invisible children of Uganda threatened by the baddest man in the world, Joseph Kony, the real stars of the video are its maker, Jason Russell, and his son, Gavin. And as an exercise in awareness raising, Russell sets the bar pretty low — as though it would be enough to promote a message a child of any age could understand. Let’s get the bad guy. Yeah! The filmmaker apparently also has an eye on another prize — an Oscar.

Michael Deibert points out that Invisible Children doesn’t merely oversimplify the issues with its narrow focus on Joseph Kony — it will actually make matters worse by empowering the central government in Kampala.

The problem with Invisible Children’s whitewashing of the role of the government of Uganda’s president Yoweri Museveni in the violence of Central Africa is that it gives Museveni and company a free pass, and added ammunition with which to bludgeon virtually any domestic opposition, such as Kizza Besigye and the Forum for Democratic Change.

By blindly supporting Uganda’s current government and its military adventures beyond its borders, as Invisible Children suggests that people do, Invisible Children is in fact guaranteeing that there will be more violence, not less, in Central Africa.

I have seen the well-meaning foreigners do plenty of damage before, so that is why people understanding the context and the history of the region is important before they blunder blindly forward to “help” a people they don’t understand.

U.S. President Bill Clinton professed that he was “helping” in the Democratic Republic of Congo in the 1990s and his help ended up with over 6 million people losing their lives.

In the whole half hour of the video, the name of Yoweri Museveni does not even crop up once. Museveni has been President of Uganda for the past 26 years, and it is against his rule that the LRA rebellion started. He is a corrupt autocrat, ineffective in providing basic social and economic services, with a history of well-documented human rights violations – not least of which was his role as a major instigator of the Second Congo War with his invasion and occupation of the DRC, a conflict which resulted in the deaths of 5.4 million people, making it the bloodiest conflict worldwide since World War II. Although the conflict officially ended in 2003, it was estimated that in the following year, there were 1000 deaths every single day from disease and malnutrition in the Democratic Republic of Congo as a result of the destruction caused by the war– these are the real invisible deaths, not the spectacular kidnappings of a crazed jungle warlord.

A charity that rewards its staff well and uses less than a third of the funds it raises on direct aid, can, as one newspaper in Uganda suggests, be viewed as merely having positioned itself to “make a quick buck” while “feeding off their harrowing tales” of those it claims to help.