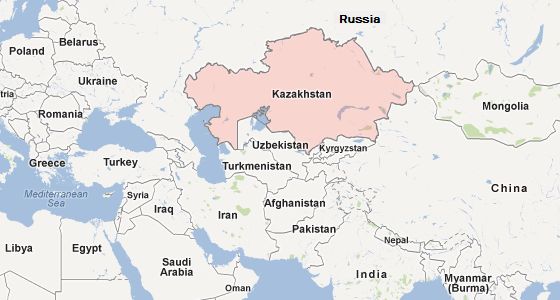 Steve Horn and Allen Ruff report: December 16, 2011, should have been, at minimum, a fairly bright day for the people of Kazakhstan marking the country's Independence Day and 20th birthday.

But rather than being a moment of celebration, it became a day of brutal repression and death, a bloody scene in the regional center of Zhanaozen paralleling those that occurred at the hands of US-supported dictatorial regimes during the uprisings now commonly referred to as the Arab Spring.

The victims of the state's crackdown were striking oil workers protesting subsistence wages and poor working conditions in the city of 51,000 citizens 75 miles east of the Caspian Sea.

Following the shootings and arrests, Zhanaozen, home to the state-owned oil company, KazMunaiGas (KMG), was placed under a state of emergency. Authorities cut off Internet and communications access nationwide and the city was inundated with additional thousands of police. KMG has ongoing business ownership partnerships with the US-based multinational energy giants Chevron and ExxonMobil, which hold significant concessions in the country.

EurasiaNet's Joshua Kucera reported the attacks on the strikers were carried out by police armed with US-supplied weaponry. Some of the 114 Humvees given to Kazkahstan since 2002 as part of the US-funded  Kazakhstan Peacekeeping Brigade (KAZBRIG) were filmed on the streets during the height of the repression.

That same cold, dark December day at Aktau, 75 miles to the west, police cracked down on rallies held in solidarity with the Zhanaozen workers. Human Rights Watch documented that, "police detained about 100 protesters and took them to a temporary detention center … Workers in Aktau reported heavy police surveillance at the protest, which was held in front of the regional mayor's office."

Human Rights Watch responded to the abuse of civil liberties by calling for an investigation into the use of state violence and called for the restoration of telecommunications services.

The repression was conducted by a police apparatus built up under the dictatorial reign of President Nursultan Nazarbayev, the country's leader and "winner" of fixed election after election since the Central Asian Republic became independent following the break-up of the Soviet Union in 1991.

Later, parliamentary elections took place on January 15, with Nazarbayev initially barring those living in Zhanaozen from participating. He later revoked that decision, but that didn't matter, since the elections are consistently rigged to begin with under what is essentially a one-party state.

The December repression of oil workers, and the political situation at large in Kazakhstan, call for a deeper examination into the geopolitical situation of a country located at the heart of what has long been referred to as the historic Silk Road trade route and what investigative journalist Pepe Escobar refers to as Pipelineistan.

Four times the size of Texas and larger than western Europe, a massive country of over 16 million at the heart of Central Asia, resource-rich Kazakhstan has increasingly become a vital centerpiece of US strategic interest, "soft power" and "hard power" regional influence.

The country has become case study for US deployment of the so-called "three D's": diplomacy, development and defense – as part of the broader ongoing long-war effort delineated in the Pentagon's April 2011 National Strategic Narrative and elsewhere. [Continue reading…]