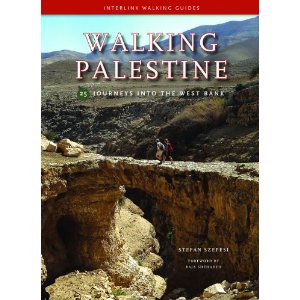 The Guardian reports: Mohammed Atari heaved the rock into position, its painted red and white sign marking a seven-mile trail across wheat fields, olive groves and gentle stony hills in the north of the West Bank. “When we started marking walking trails, people were suspicious,” he said. They feared the markers signified a new Israeli settlement or military zone.”

Walking for pleasure is a concept unfamiliar to most Palestinians. But over the past five years, hikers – mainly foreign diplomats, aid workers and journalists, but also locals – have become a more common sight in the West Bank. Their hikes range from the rolling lush hills and valleys of the north to the dramatic arid desert landscape of the south.

This week sees the publication of Walking Palestine, a guide to 25 walks, the fruits of a four-year project by a Dutch diplomat, Stefan Szepesi. It details tracks, paths and dirt roads; supplies maps and information on historical sites, wildlife and natural attractions; and provides practical details on local guides, parking, public transport, restaurants and places to stay.
Map – Walking in Palestine, Jenin Walking in Jenin.

Szepesi began walking in the West Bank soon after arriving to work for the EU; he later moved over to the Middle East Quartet. The outings were born of a need to escape the intensity of Jerusalem, but also a desire to get to know Palestinians and their land in a more intimate way than he could from the confines of a diplomatic mission headquarters.