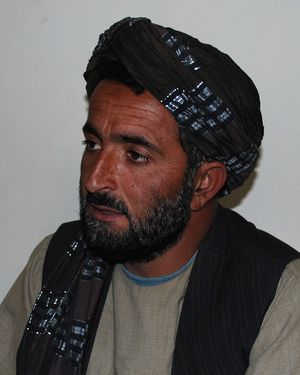 The Wall Street Journal reports: Mohammed Wazir says he was having breakfast with his brother in the town of Spin Boldak when he received the phone call from his village three hours away. “All your family members are martyred,” a neighbor told him.

When Mr. Wazir, a 33-year-old farmer with a sun-creased face and graying beard, reached his small mud home in the Panjway district of Kandahar province, he says he discovered that 11 relatives had been killed and set on fire, victims of a predawn rampage allegedly perpetrated by U.S. Army Staff Sgt. Robert Bales.

Mr. Wazir and other villagers shared with The Wall Street Journal in Kandahar their accounts of the March 11 tragedy that has inflamed anti-American sentiment here and poisoned U.S.-Afghan relations, possibly affecting the course of the war.

Panjway and the neighboring districts have been a battlefield between the Taliban and U.S.-led coalition forces for years. Many houses in the area remain in ruins and explosion craters dot the fields.

The U.S. special-operations forces base where Sgt. Bales served was set up under a strategy to protect the local population. Instead, the arrival of U.S. troops provoked Taliban attacks—and prompted more villagers to flee the already sparsely populated area.

“The only people who have remained are those who couldn’t afford the expense of moving their families to the city,” says Mullah Baran, a 38-year-old whose brother, Mohammad Dawood, was the first victim of the March 11 rampage, according to witnesses to the shooting, and other villagers. “The Americans said they came here to bring peace and security, but the opposite happened. Now, this village is a nest of ghosts.”

Mr. Baran, who says he had to scrape his brother’s brain and pieces of skull from the floor of their home, lost only one relative. His brother’s wife started screaming at the intruder, he says, and the gunman spared her and her six children.

In the Wazirs’ mud compound a few hundred yards away—a dwelling so poor that a piece of cloth served as a front door—no one was spared.

Mr. Wazir—judging by bloodstains, the layout of his home, and his knowledge of where his family sleeps—says his 60-year-old mother, Shah Tarina, was shot first as she greeted the intruder. In his bare bedroom, his wife Bibi Zohra was shot together with their daughters, 4-year-old Nabiya, 6-year-old Farida and 9-year-old Masooma.

In another room, Mr. Wazir’s sons Faizullah, 12, and Ismatullah, 13, were shot dead in their beds. Then, in a third room, Mr. Wazir’s brother, Akhtar Mohammed, 20, his brother’s new bride, 18-year-old Bibi Nazia, and a nephew, Essa Mohammed, 15, were killed.

All of the bodies were found afterward, after being dragged into the front room, blankets and clothes piled on top, and then torched, Mr. Wazir and other witnesses say.

Mr. Wazir says the corpse of his 2-year-old daughter Palwasha was amid the charred bodies. He believes she was burned alive. “I checked her body, and there were no bullet marks.”

The intruder faced no resistance because the locals were used to U.S. night raids. There was one in the same cluster of houses just five days earlier, Mr. Wazir says, after a roadside bomb hit a U.S. armored vehicle nearby.

He says U.S. troops threatened village elders after the bombing, warning them the village will pay a price if such attacks occur again.

A U.S.-led coalition spokesman in Kabul, U.S. Army Col. Gary Kolb, said the military “won’t speak to any specifics of what some of the villagers are saying.” He said he had no information about the bombing described by Mr. Wazir because not every such incident is reported to Kabul.

Like other villagers — and Afghan President Hamid Karzai — Messrs. Wazir and Baran say they believe more than one shooter was involved, if only because of the effort needed to move and burn 11 bodies. U.S. officials say they believe there was a single assailant.

Mr. Wazir says he is haunted by guilt. “It hurts me a lot when I remember occasions when I shouted at my sons because I asked them to do something and they ignored it,” he says. “I feel so very sorry now.” [Continue reading…]

CNN spoke to Bales’ lawyer, John Henry Browne: Browne predicted the case — whenever it comes to trial — is going to be “extremely difficult” for the prosecution.

“They have no murder scene, no forensics,” the lawyer said Thursday night from outside his Seattle office. “I’m going to make them prove every claim.”

U.S. officials have alleged that Bales carried out the killings alone in two neighboring villages in the Panjwai district of Kandahar province, in southern Afghanistan. Bales was flown out of Afghanistan last week and is being held at Fort Leavenworth, Kansas.

Afghans are insisting that the suspect be returned to Afghanistan to face trial, with villagers and lawmakers questioning the U.S. military’s account of what happened. But a military official said in Afghanistan on Sunday that Bales will be tried in the United States.

The rampage has strained already tense U.S.-Afghan relations and intensified a debate about whether to pull American troops ahead of their planned 2014 withdrawal. Afghan President Hamid Karzai has demanded that troops withdraw from villages in his nation and return to their bases, saying relations between the two countries were “at the end of their rope.”

On Wednesday, Afghanistan’s foreign minister called for a “swift and transparent investigation” into the killings of 16 men, women and children. But CNN legal contributor and defense attorney Paul Callan told CNN’s “Erin Burnett OutFront” that the case against the lone suspect in their deaths, Bales, may be largely circumstantial.

“There were admissions allegedly made by Sgt. Bales to some of his fellow soldiers, in which he claimed at least that he wasn’t shooting women and children, (and rather) was shooting men of military age,” Callan said. “Now, that would be an admission by him that would link him to the crime scene. If they then link his gun to the specific victims, then they easily make a connection and they can prove their case.”

Callan said he believed prosecutors would seek the death penalty against Bales,”because this is one of the biggest alleged massacres in memory.”

“You have the diplomatic and political problems that are being caused by this crime,” Callan said. “Afghan citizens will be looking, saying, ‘Is the U.S. seeking justice in this case?’ “