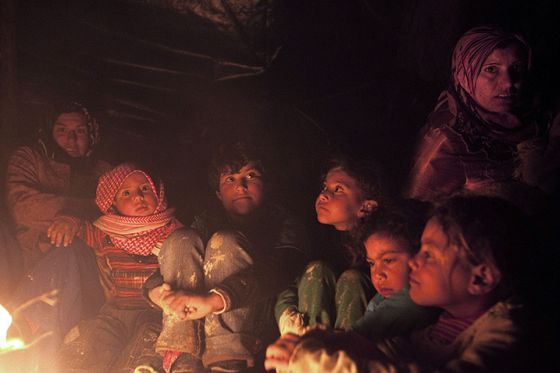 A Syrian refugee family wait for rebels to help them across the Turkish border. Photograph: Giorgos Moutafis/AFP/Getty Images

Jonathan Jones writes: Here is the truth about revolution, war, dictatorship and resistance. It is a simple truth and it is crushing: people suffer. In this powerful picture by Greek photojournalist Giorgos Moutafis a refugee family in Janoudia in north-western Syria wait for rebels to help them across the border into Turkey. In the bold rhetoric of our time, this might be described as a picture of defeat, an indictment of Bashar al-Assad’s crackdown on opposition to his rule, a call to arms for western democracies that are so much less eager to help in Syria now than they were in Libya a year ago. Perhaps it is all those things, and anything else politics wants it to be. But first, it is a human document.

Five children sit in a pool of light amid the dark, their faces patient and resilient, their confusion and fear obvious. Each has a different expression but none are smiling. One child gazes downward while the youngest-looking boy stares at the camera. The adults in the picture, knowing more, look back at the photographer as they gather close to the children. Everyone’s eyes seem to be searching, puzzling. The glow that warms their faces reveals a moment of contemplation before the next arduous stage of a journey.

Painters have known for centuries how to use nocturnal light to intensify our recognition of vulnerability. In his painting The Nativity at Night, which dates from about 1490, Geertgen tot Sint Jans shows the Madonna and child by candlelight against the dark. In this photograph, the shiny wall of the tent or canopy behind them creates a starless black night. Against this eeriness, Moutafis is able to give this family a profound dignity as the human instinct for light in the shadowed hours heightens their meditative companionship.