Khaled Diab interviews Zaid Shuaibi, a young Palestinian activist: A hip bar in Ramallah named after a famous cocktail where friends and lovers come to hang out and chill is probably not the most obvious place to meet a young Palestinian revolutionary. While around the world people do drink and drive for change, outsiders tend to view Palestinians as straight-laced teetotallers, especially since the rise of Hamas, but judging by the number of watering holes in Ramallah, the truth is another country.

Taybeh, Palestine’s only domestically produced beer, even once had as its motto, “Taste the revolution”. And armed with a large glass of Taybeh, I had come to get a taste of what a new generation of savvy young Palestinian activists were brewing. 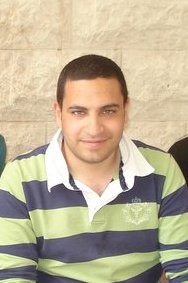 Zaid Shuaibi couldn’t be further from the traditional Western image of the wild-eyed Arab fanatic. He is soft-spoken, measured, understated and seems at harmony with the mellow, subdued ambiance of our meeting place. Though only 22, his maturity and depth cannot be measured in simple years.

Shuaibi, who I have met a number of times, spent the first half of his life in Saudi Arabia before his family returned to Ramallah, where he has lived ever since. Despite the hardships they‘ve endured, they have no regrets about having resettled in their native land.

Zaid discovered his passion for political activism at Birzeit university, though he emphasises that, despite his left-leaning, secular views, he is not aligned to any particular political party or current, partly as a demonstration of his independence and partly because he finds none of the established parties is fully satisfactory.

As a sign of his dedication to the Palestinian cause, he gave up the prospect of pursuing a career with an international agency in order to free himself up for his activism. He now works as an outreach coordinator for the Boycott, Divestment and Sanctions (BDS) campaign and is closely involved with the Palestinian youth activist movement.

Speaking with this young activist is inspiring and encouraging on so many levels. He and his co-resistors belief in peaceful protest, and the creative new techniques they are employing, especially after the disaster of the second intifada, that non-violence is perhaps the most powerful weapon in the Palestinian arsenal. Their recognition of the need for major, internal Palestinian reform is also timely and necessary.

Nevertheless, the odds they are up against can seem depressingly insurmountable. The situation on the ground is changing rapidly and, in many ways, perhaps irreversibly, as Israel’s settlement express train continues largely unhindered. This has caused a sense of inertia among Palestinians, to which even creative young activists can succumb. There is a widespread sense that the two-state option is dead, or at the very least comatosed in intensive care, and any possible Palestinian state will not only be small and lack territorial congruity, but will also not enjoy true sovereignty or independence.

But Shuaibi and many other activists, even though they believe in a single, democratic state for all Israelis and Palestinians, are reluctant or unwilling to act on this conviction now and fight for one now by transforming their struggle into a civil rights movement for full and equal citizenship, which I personally believe is the most effective way forward, at least for the foreseeable future. Of course, Palestinians deserve an independent state, but what they’re likely to get, if anything, is a virtual state, a state on paper, or, worst of all, a continued state of denial of their rights.

I know that, after so many decades of struggle and their rapidly shrinking prospects of independent statehood, the idea of becoming “Israelis” sits uncomfortably with most Palestinians, but with full enfranchisement they will be able to leave their imprint on the Israeli system, change it from within and gradually transform it into a state for all its citizens.

But given the worsening situation since the Oslo years, when Palestinians and Israelis regularly met and co-operated, and in light of the traditional Arab discourse regarding “non-normalisation”, not only does the idea of becoming Israelis not appeal, but positions are hardening even towards the idea of dealing with Israelis. Although I admit I could be wrong, I feel this refusal is not only a case of meeting wrong with wrong but is also counterproductive.

Working with Israeli activists and challenging and courting Israeli public opinion is, in my view, crucial, because Israel holds most of the cards and, after decades of waiting, the idea that the international community will come galloping in on its white steed to deliver the Palestinians their rights looks, it is safe to say, highly improbable.

That said, Palestinian and Israeli activists are increasingly resisting the occupation together, as demonstrated in so many cases, such as the joint protests against the Israeli separation wall, and a sizeable minority do recognise the importance of co-activism. Moreover, today’s young Palestinian activists are borrowing from the tactics of the American and South African civil rights movements. And the next logical step, once enough admit that the two-state solution is dead in the water, would be to adopt the objectives as well as the tactics of civil rights.

It is largely up to Palestinians and Israelis to come to some sort of accommodation on their own, and this requires direct engagement. And, as the weaker party, the most powerful weapon the Palestinians possess is people power.

And inspired by the popular mass movements that have emerged across the region, Palestinian activists are rediscovering the spirit of the largely peaceful first intifada which succeeded in changing so much (yet so little). But can they heal the internal rifts within Palestinian ranks, agree on a reinvented effective strategy and inspire the masses to take action? [Continue reading — interview]