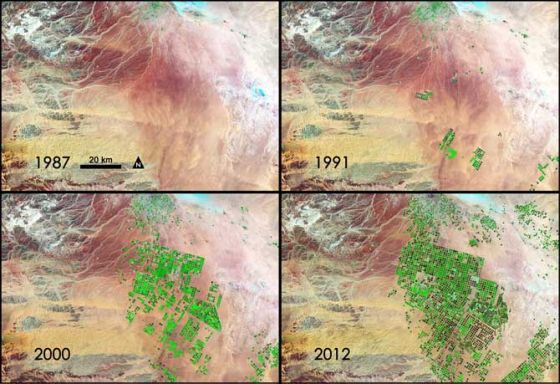 In this series of four Landsat images, the agricultural fields are about one kilometer across. Healthy vegetation appears bright green while dry vegetation appears orange. Barren soil is a dark pink, and urban areas, like the town of Tubarjal at the top of each image, have a purple hue. Credit: NASA/GSFC

Over the last 24 years, it has tapped hidden reserves of water to grow wheat and other crops in the Syrian Desert. This time series of data shows images acquired by three different Landsat satellites operated by NASA and the U.S. Geological Survey.

The green fields that dot the desert draw on water that in part was trapped during the last Ice Age. In addition to rainwater that fell over several hundred thousand years, this fossil water filled aquifers that are now buried deep under the desert’s shifting sands.

Saudi Arabia reaches these underground rivers and lakes by drilling through the desert floor, directly irrigating the fields with a circular sprinkler system. This technique is called center-pivot irrigation.

Because rainfall in this area is now only a few centimeters (about one inch) each year, water here is a non-renewable resource. Although no one knows how much water is beneath the desert, hydrologists estimate it will only be economical to pump water for about 50 years.