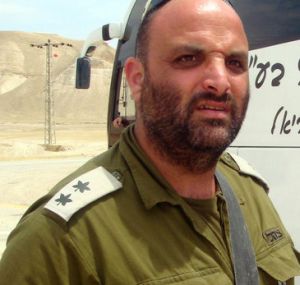 Israel’s President Shimon Peres, Prime Minister Benjamin Netanyahu, and IDF Chief of Staff Benny Gantz, all understand the world well enough to be in no doubt that the behavior of Lt. Col. Shalom Eisner as he slammed his M-16 rifle into the face of a Danish activist, Andreas Ias, was bad for Israel.

“Such behavior does not characterize IDF soldiers and officers and has no place in the Israel Defense Forces and in the State of Israel,” Netanyahu said.

Indeed. But the problem for Israel is that not only was Eisner’s behavior not an aberration — it has been widely praised.

In less than 24 hours a Facebook page, “We Support Lt Colonel Shalom Eisner,” has received several hundred “likes.” (The French-speaking creator of the page also happens to like the extremist Jewish Defense League and the English Defense League.)

“How can you say this was ‘a serious event’ after only a few seconds of footage? These kinds of incidents are why today’s commanders feel they have no backing.”

Danny Dayan, the chairman of the Yesha Council for Jewish settlers in the West Bank on Monday condemned the “overwhelming hysteria” in Israel over Eisner’s attack. He said there was no reason for the prime minister, the defense minister, and other high-ranking political authorities to be involved.

“Well done to the IDF officer who did what Bibi [Netanyahu] and [Yitzhak] Aharonovich [minister of internal security] have no brain or courage to do,” Ben Ari said. “Radical leftists must be handled with a heavy hand. There was a tangible threat to the lives of the soldiers and the officer had no other choice.”

Along with politicians, fellow soldiers have now voiced their support for Eisner. Ynet reports:

Eighty-three reservist officers and soldiers who served under the lieutenant colonel who was videotaped striking a Danish pro-Palestinian activist with an M-16 rifle, sent a letter addressed to IDF Chief of Staff Lt.-Gen. Benny Gantz and Defense Minister Ehud Barak in which they expressed “support and appreciation” for their “moral and ethical commander.”

Amidst so much sympathy for the lieutenant colonel, Ziv Lenchner, a Ynet columnist, expresses a deeper concern: that Eisner’s behavior accurately reflects Israel’s moral decline.

The truly easiest thing is to hide behind the details that may emerge or the arguments that may be presented – a pacifist provocation, a difficult day in the area, warm weather that inflamed the spirits – in order to justify the epitome of brutality.

One regrettable fact will not be going anywhere: A thug wearing a lieutenant colonel uniform forcefully striking the jaw of a protestor using an IDF rifle. This is a moral nadir that a moral society cannot tolerate and certainly should not accept. It must not.

With one gesture, Lieutenant Colonel Eisner provided a new and appalling interpretation to the term “purity of arms.” The disturbing thought that won’t let go wonders how many such cases take place in our country and in the territories, right under our noses and not in front of our cameras.

Many sneers must accompany the above words, and this is no coincidence. An interesting historical study to be undertaken one of these days will aim to figure out when exactly did morality turn into “self-righteousness” and “being a bleeding heart” in Israel.

Most public responses to Eisner’s act, as expressed in the talkbacks among other things, are sympathetic to his actions. The reactions range from “the Danish scumbag deserved it” to “Eisner is a real man.” The prevalent argument among the handful of objectors has to do with the PR angle: How foolish it was for the senior officer to act this way in front of the cameras, thereby undermining Israel’s image (which is otherwise superior, as we know.)

There is no doubt that the images from the Jericho area will cause Israel PR damage, and rightfully so. Yet the fact this is the main issue that concerns Israel’s decent citizens is odd, not to mention twisted – not the fact that an IDF lieutenant colonel behaves like a Syrian thug in Homs, but rather, the fear that the world will see it on television and think bad things about us.

This is actually an excellent opportunity for us to think about ourselves. How did we reach a state where a protestor on a bicycle, even if he’s naïve, eccentric and annoying, is received by the Israel Defense Force with a bone-shattering gesture, and only a few of us view it as a crime?

This may be a natural development in a country that is so scared that it undertakes a mass deportation of foreign protestors instead of allowing them to demonstrate as much as they wish in the West Bank. After all, said the man at the top, we are the only democracy in the Middle East. Aren’t we?

The blow delivered by Lieutenant Colonel Eisner is particularly painful because it was delivered by a senior officer, rather than a young, inexperienced soldier who lost his head. It’s even more difficult and painful because of the target of the blow, and it wasn’t only the Danish protestor’s face. It was the face of all of us. Look in the mirror for a second and see what our face looks like this morning.

7 thoughts on “Israel: Lt. Col. Shalom Eisner and his supporters”