Sarah Leonard writes: Each generational wave of environmental concern seems to lap at Wendell Berry’s doorstep. He gave up teaching and writing in New York in the sixties to return to Kentucky, establishing a small farm at Lanes Landing near Port Royal, and dedicating himself to writing about the roots of the life he leads there. Readers have sought his inspiration to overcome the incessant churning of environmental destruction and industrial food production. Berry embodies a certain sort of alternative. When I arrived at Lanes Landing, I knew that many seekers had come before me to put a face to the writing, and to see this life for themselves. 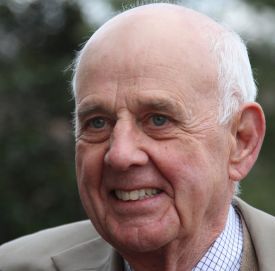 Berry is best known for his attention to place—an insistence on community and an intimate knowledge of home, from the soil to the weather patterns to the human history. I initially came to his work through the Southern Agrarians, a group of twelve Southerners who in 1930 published I’ll Take My Stand, a manifesto against Northern industrialism and the loss of a romanticized, rooted, agrarian life. Berry’s resistance to capitalist definitions of progress rhymes with a long intellectual tradition of skepticism of American urbanization, mechanization, and hypermobility. His 1973 “Manifesto: The Mad Farmer Liberation Front” begins with the image of the uprooted, commercially oriented modern:

Love the quick profit, the annual raise,
vacation with pay. Want more
of everything ready-made. Be afraid
to know your neighbors and to die.
And you will have a window in your head.
Not even your future will be a mystery
any more. Your mind will be punched in a card
and shut away in a little drawer.
When they want you to buy something
they will call you. When they want you
to die for profit they will let you know.

Even as he subjects market society to a scathing critique, he seeks out the tensions that remained deeply unresolved in the writings of the Agrarians: how people might become more free—free from patriarchy, racism, and so on—without becoming deracinated. In The Hidden Wound, Berry explored race through his experience growing up on a Kentucky farm, and in essays like “Feminism, the Body, and the Machine,” he set freedom in relation to the productive household economy; feminism for him, and male freedom too, is full and free employment within an independent household, minimally reliant on commodities.

Berry’s influences can be traced beyond the Agrarians to ecological and religious conceptions of nature. He asks how we can develop our understanding of our environment so that we can respect its limits as we arrange our human lives. He therefore opposes the national-parks model of conservation: purity on this side, despoliation on the other. “Agriculture using nature,” he has written, “…would approach the world in the manner of a conversationalist….On all farms, farmers would undertake to know responsibly where they are and to ‘consult the genius of the place.’”

All of this raises serious questions about a sort of agrarian epistemology. If we can’t count on technocratic solutions, how can we determine our limits? How do we consult the genius of place? Berry approaches this question through discussions of the farming life, but through religion and poetry as well. His most recent book, The Poetry of William Carlos Williams of Rutherford, is a tribute to the poet whose work explored Paterson, New Jersey, with all the sensitivity and accompanying understanding that Berry brings to poetic explorations of his own place.

Lest this all sound too abstract, the first thing Berry placed in my hands, after a glass of water, was the 50-Year Farm Bill, a long-term proposal largely devised by his friend Wes Jackson of the Land Institute “for gradual systemic change in agriculture.” The proposal focuses on redeveloping the natural biodiversity of land, and Berry has been to Washington to lobby on its behalf. Berry has been active as well in opposition to the coal industry in Kentucky, and recently withdrew his papers from the University of Kentucky after it accepted coal money to build a dormitory for the basketball team.

Berry, now seventy-seven, has received many accolades for his work. This year he was chosen to give the Jefferson Lecture in the Humanities, the federal government’s top honor in the humanities. The Michael Pollans of the world pay him tribute openly and often. But the state of ecological affairs in America and the world is now more dire than when he started writing.

Berry’s farmhouse sits on a steep hillside overlooking the Kentucky River and land about which he has long written, “a place I don’t remember not knowing.” It is heartening to see Berry honored and his works quoted, but Berry asks us to be concerned with the whole agricultural process, from the land to the workers, all the overlapping realms of economy discussed by the authors in this special section. This is not an easy thing to do in the face of impending environmental catastrophe, a situation that would seem to demand quick fixes. We began with Berry’s lamentation that food alone should so dominate public discussion. [Continue reading…]