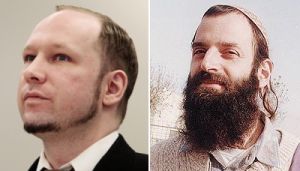 Anders Behring Breivik, the Norwegian mass murderer who killed 77 fellow Norwegians last July, wants to portray himself as both sane and the champion of a righteous cause. In his testimony before a court in Oslo he has said that he and other militant nationalists in the West are “selling dreams” to inspire others.

Can a man who has displayed such ruthlessness become a source of inspiration? The answer is clearly yes and one of the most obvious parallels to Breivik would be Baruch Goldstein.

After the American-born Jewish Israeli physician killed 29 Palestinians and wounded another 125 at the Cave of the Patriarchs massacre in Hebron in 1994, thousands of people visited Goldstein’s grave to pay their respects.

A few days after the massacre, the New York Times reported:

Dr. Goldstein, who was finally overcome and beaten to death by the worshipers, was buried today in Qiryat Arba after a funeral service in which some mourners praised him as a hero and a righteous man. His grave was said to be temporary, and there are plans to move him to the Jewish cemetery in Hebron when tensions ease.

“One million Arabs are not worth a Jewish fingernail,” Rabbi Yaacov Perrin said in a eulogy. At the service in Jerusalem, attended by 300 people, one man shouted, “We are all Goldstein,” an opinion echoed across Qiryat Arba by neighbors who said variously that they approved of his attack on the Arabs or at the least could not judge him.

Goldstein was a follower of Rabbi Meir Kahane and belonged to Kahane’s Jewish Defense League.

After Breivik’s bombing and shooting rampage, those in Europe and the United States who share his views about an “Islamic threat” have largely wanted to distance themselves from his actions even while defending his outlook.

There are however a few exceptions.

“Anders Breivik, The Kangaroo Court and The Lies of The Left,” a post at the Jewish Defence League UK website says (excerpt posted here without corrections):

At the beginning of the trial, Officials and Court members shook Breivik’s hand as if to give a Façade that they were not corrupt in the trial of this man. Anders Breivik spoke out and refused to recognize the court as The court room was being held by Leftists who were connected to the Marxist government of Norway. Quite rightly, because it was a classic Kangaroo court. the judges and prosecution were constantly staring at Breivik wide eyed, they were like a bunch of children trying an adult, they looked completely unprofessional and out of their league. A man like Breivik in a case such as this surely deserves a better trial than that?
[…]
[W]hat happened on Utoya was regrettable, but those to blame are those who held the rally, the Labour Youth and the Norwegian government. Breivik killed nobody under the age of 14 in the shootings, they were young adults. The rally at Utoya was certainly no “kids day out” it was an Far Left indoctrination weekend, set on a picturesque island, only the day before those attending were holding “Boycott Israel” banners to show the cameras. You tell me what “child” attends political meetings? You tell me what “child” is classed as an up and coming Politician? They were not children, they were young adults. I hold the same amount of sympathy for the those on Utoya as I would if somebody committed this act on a Hitler Youth camp in the 1940’s, or were they just “children” as well?

“There are thousands and thousands of people desperate like [Breivik]” says co-founder, spokesman and leader of the English Defense League, “Tommy Robinson” (Stephen Yaxley-Lennon).

Breivik’s prosecutors will no doubt work hard to portray the accused as delusional in the hope that the “dreams” he wants to sell will find no buyers. But though his view of the world is no doubt twisted, it is shared far too widely to be dismissed. And were Breivik not a rightwing extremist and white, he would without question have been branded a terrorist and those who share his views be seen as terrorist sympathizers.

The label “terrorist” has little value if it serves as nothing more than as an expression of antipathy, but the ranks of Breivik’s fellow travelers are all too easy to identify.

Even if the Knights Templar network to which Breivik claims he was recruited doesn’t actually exist, such a group with the aims he has outlined could certainly be created.

The idea that Breivik’s trial and conviction should serve as a warning to those who might contemplate following his lead reflects the slanted view of justice which puts all the emphasis on punishment. Indeed, punishment — whatever form it takes — will for Breivik be turned into some kind of ideological reward.

The most valuable function his trial can serve is as a demonstration that the actions of an individual or handful of individuals should not be used as a justification for abandoning the legal and democratic principles upon which a free society is based.

Much has been said about how Norway reacted as a nation in the immediate aftermath of the attacks, but in 10 weeks we will know what this nation is really made of.

The first challenge is to accept that no punishment can ever fit the crime. Some have called for changes in the legal system to allow for longer prison sentences or even death, but even if those had been real possibilities no punishment in the world is ever going to feel enough. Others have reacted strongly to pictures of the terrorist smiling and giving extremist salutes in the courtroom, pointing out that he is getting exactly the kind of attention he wants.

We should be outraged by the ideas that motivate him, but if we deny him the chance of explaining himself in an open court, we let the essence of those ideas, oppression and intolerance, dominate us. Although my heart is filled with anger, fear and sorrow, I am glad the Norwegian legal system treats everyone the same and is not subject to popular opinion. Its objective rules are there to deliver justice when emotions get the better of us. If Norwegians can hold on to that, they have already won a great victory.

The second challenge is to remain true to the values of Norwegian society. It is easy to be sympathetic to demands for stronger censorship, policy controls and online surveillance. Many will suggest that Breivik could have been stopped if only we had adopted some measure or other. But such doubts must not be allowed to change Norway. Even more important than the terrorist’s right to speak in court is that the right of opinion and right of organisation keep forming the core of our free society. Right of opinion, the heart of freedom of speech, also includes right of privacy and anonymity.

Extremism of any creed is not fuelled by those who speak in public, but by those who feel that no one speaks for them at all. There must be room for even the dark sides of human nature if Norway is to remain Norway. Only then can Norwegians emerge on the other side of this challenge as a greater and stronger people than they were before.