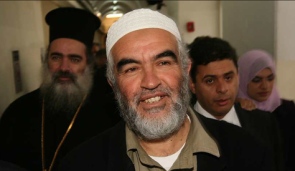 Raed Salah writes: In June 2011 I came to Britain to begin a speaking tour to draw attention to the plight of my people, the Palestinian citizens of Israel. The tour was meant to last 10 days. Instead I had to stay for 10 months in order to resist an attempt by the home secretary, Theresa May, to deport me – itself the result of a smear campaign against me and what I represent. I fought not just for my own sake, but for all who are smeared because they support the Palestinian cause.

Since 1990 I have visited the UK several times to speak publicly. On this occasion I was arrested, imprisoned, and told I was to be deported to Israel because my presence in the UK was “not conducive to the public good”. A judge later ruled that I had been illegally detained, but bail conditions continued to severely restrict my freedom, making it impossible for me to speak as I had intended.

After a 10-month legal battle, I have now been cleared on “all grounds” by a senior immigration tribunal judge, who ruled that May’s decision to deport me was “entirely unnecessary” and that she had been “misled”. The evidence she relied on (which included a poem of mine which had been doctored to make it appear anti-Jewish) was not, he concluded, a fair portrayal of my views. In reality, I reject any and every form of racism, including antisemitism.

I have no doubt that, despite this, Israel’s cheerleaders in Britain will continue to smear my character. This is the price every Palestinian leader and campaigner is forced to pay.

My people – the Palestinians – are the longstanding victims of Israeli racism. Victims of racism, anywhere, should never condone or support the maltreatment of another people, as Israel does.

The suffering of the Palestinian citizens of Israel has been ignored for decades. But there is today a growing awareness of it, which partially explains this smear campaign against me. In December 2011, EU ambassadors in Israel raised serious concerns about Israeli discrimination, noting that “not only has the situation of the Palestinian Arab minority in Israel not improved, but it has further deteriorated“. [Continue reading…]