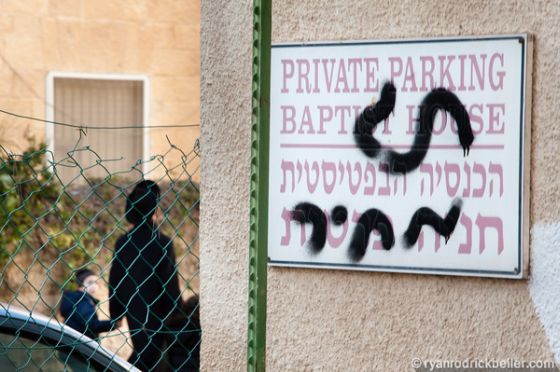 'Jesus is the son of a whore,' 'we will crucify you,' 'Jesus is dead' and 'death to Christianity' were among messages left behind by vandals who attacked the Baptist Narkis Street Congregation in West Jerusalem on February 20. Photo: Ryan Rodrick Beiler

When Israel’s ambassador to the U.S., Michael Oren, called Jeff Fager, chairman of CBS News and executive producer of 60 Minutes to speak about their upcoming report, “Christians of the Holy Land,” it’s clear he had only one objective: to kill the report.

When interviewed by Bob Simon, Oren did not express concern about how 60 Minutes would report on the plight of Palestinian Christians living in the West Bank. His objection was that CBS should find any merit in the topic whatsoever. Why should the fate of Christians living under Israeli occupation deserve any attention while Christians elsewhere in the Middle East face persecution? The story, Oren was convinced, was merely a pretext for attacking Israel.

In February this year, vandals — the evidence suggests they were Jewish settlers — daubed “Death to Christianity” on the walls of a Baptist church in Jerusalem. “The graffiti also included profanity about Jesus, and the vandals slashed the tires of several cars parked in the church compound,” Reuters reported.

It wasn’t long before Oren spoke up on the op-ed page of the Wall Street Journal denouncing attacks on Christians and the desecration of a church — though not the one in Jerusalem. The vandalism that concerned him involved the Arabic letters for Hamas being sprayed on a church in Bethlehem in 1994. About the much more recent vandalism on the church in Jerusalem he said absolutely nothing.

Oren’s message while ostensibly being an expression of concern about the plight of Christians across the Middle East, including Palestinian Christians living in the West Bank, was instead a message tailored to resonate with American Christian Zionists: Jews and Christians stand in solidarity opposed to Islamic extremism.

Kairos Palestine, a group of Palestinian Christians in the West Bank who featured in the 60 Minutes report, were quick to denounce Oren’s statement.

We add our voices to several other recently published responses that have emphasized this reality and the ways in which Oren’s op-ed attempts to mask it. Indeed, contrary to his assertions, Christian persecution is caused mainly by the occupation that systematically degrades all Palestinians, restricts our movement, confiscates our land, devastates our economy, and violates our rights — including the very basic right to a decent life.

We are particularly troubled by Oren’s attribution of migration within the Palestinian Christian community to ill-treatment by Palestinian Muslims. This damaging analysis wilfully ignores the underlying political oppression that afflicts Christians and Muslims alike. In the case of Bethlehem, for instance, it is in fact the rampant construction of Israeli settlements, the chokehold imposed by the separation wall, and the Israeli government’s confiscation of Palestinian land — largely Christian-owned land in the Bethlehem area — that has driven many Christians to leave.

In Oren’s op-ed and his dealings with CBS we see the two main thrusts of the Zionists’ communications strategy: propaganda and suppression.

If critics can’t be drowned out in the media then efforts to silence them have to become more direct. Never is their any willingness to face a challenge directly. Zionism, it would seem, even for its most strident proponents is indefensible. Rather than respond to honest criticism, first comes the hasbara, then the silencing, and if neither of those work, the plea: our survival is at stake!

But what really threatens Israel?

The breakdown of public morality, in my view, poses the greatest single existential threat to Israel. It is this threat that undermines Israel’s ability to cope with other threats; that saps the willingness of Israelis to fight, to govern themselves, and even to continue living within a sovereign Jewish state. It emboldens Israel’s enemies and sullies Israel’s international reputation. The fact that Israel is a world leader in drug and human trafficking, in money laundering, and in illicit weapons sales is not only unconscionable for a Jewish state, it also substantively reduces that state’s ability to survive.

Those being the words of Michael Oren not long before he became an ambassador and one of the pillars of Israel’s public morality.

5 thoughts on “The real existential threat to Israel: honest debate”