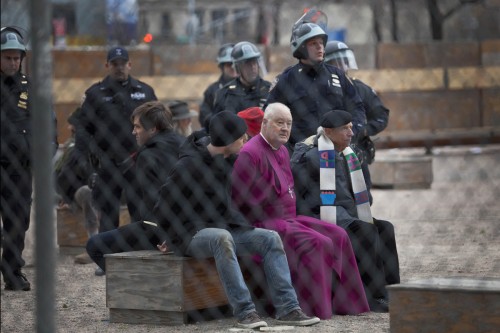 Chris Hedges writes: Retired Episcopal Bishop George Packard was arrested in Vietnam Veterans Memorial Plaza in New York City on Tuesday night as he participated in the May 1 Occupy demonstrations. He and 15 other military veterans were taken into custody after they linked arms to hold the plaza against a police attempt to clear it. There were protesters behind them who, perhaps because of confusion, perhaps because of miscommunication or perhaps they were unwilling to risk arrest, melted into the urban landscape. But those in the thin line from Veterans for Peace, of which the bishop is a member, stood their ground. They were handcuffed, herded into a paddy wagon and taken to jail.

It was Packard’s second arrest as part of the Occupy protests. Last Dec. 17 he was arrested when he leapt over a fence in his flowing bishop’s robe to spearhead an attempt to occupy a vacant lot owned by Trinity Church in lower Manhattan. The December action by the Occupy movement was a response to the New York City Police Department’s storming and eradication of the encampment in Zuccotti Park. Packard will appear in court in June to face the trespassing charge that resulted. Now, because of this second arrest, he faces the possibility of three months in jail.

Packard’s moral and intellectual courage stands in stark contrast with the timidity of nearly all clergy and congregants in all of our major religious institutions. Religious leaders, in churches, synagogues and mosques, at best voice pious and empty platitudes about justice or carry out nominal acts of charity aimed at those bearing the weight of resistance in the streets. And Packard’s arrests serve as a reminder of the price that we—especially those who claim to be informed by the message of the Christian Gospel—must be willing to pay to defy the destruction visited on us all by the corporate state. He is one of the few clergy members who dare to bear a genuine Christian witness in an age that cries out in anguish for moral guidance.

“Arrests are not arrests anymore,” Packard said as we talked Friday in a restaurant overlooking Zuccotti Park in New York. “They are badges of honor. They are, as you are taken away with your comrades, exhilarating. The spirit is calling us now into the streets, calling us to reject the old institutional orders. There is no going back. You can’t sit anymore in churches listening to stodgy liturgies. They put you to sleep. Most of these churches are museums with floorshows. They are a caricature of what Jesus intended. Jesus would be turning over the money-changing tables in their vestibules. Those in the church may be good-hearted and even well-meaning, but they are ignoring the urgent, beckoning call to engage with the world. It is only outside the church that you will find the spirit of God and Christ. And with the rise of the Occupy movement it has become clear that the institutional church has failed. It mouths hollow statements. It publishes pale Lenten study tracts. It observes from a distance without getting its hands dirty. It makes itself feel good by doing marginal charitable works, like making cocoa for Occupy protesters or providing bathrooms from 9 to 5 at Trinity Church’s Charlotte’s Place. We don’t need these little acts of charity. We need the church to have a real presence on the Jericho Road. We need people in the church to leave their comfort zones, to turn away from the hierarchy, and this is still terrifying to a lot of people in the church and especially the church leadership.” [Continue reading…]