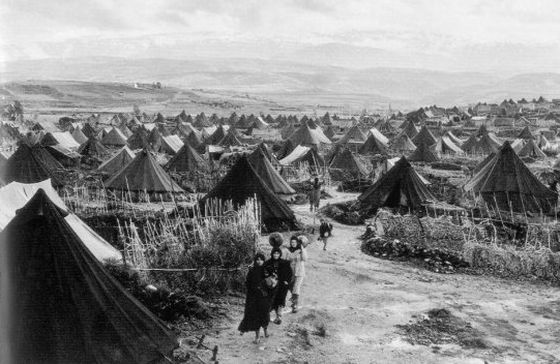 A refugee crisis that has lasted for 64 years following the ethnic cleansing of Palestine in 1948 in which the indigenous population was driven out by Zionists.

Neve Gordon writes: I first heard about the Nakba in the late 1980s, while I was an undergraduate student of philosophy at Hebrew University. This, I believe, is a revealing fact, particularly since, as a teenager, I was a member of Peace Now and was raised in a liberal home. I grew up in the southern city of Be’er-Sheva, which is just a few kilometres from several unrecognised Bedouin villages that, today, are home to thousands of residents who were displaced in 1948. I now know that the vast majority of the Negev’s Bedouin population was not as lucky, and that, in the late 1940s and early 1950s, most Bedouin either fled or were expelled from their ancestral lands to Jordan or Gaza.

How is it possible that a left-leaning Israeli teenager who was living in the Negev during the early 1980s (I graduated from high-school in 1983) had never heard the word “Nakba”?

How, in other words, is collective amnesia engendered?

There are many explanations of how master narratives are created and how they suppress and marginalise competing historical accounts. In addition to the work carried out by state institutions and apparata, this careful erasure also demands the ongoing mobilisation of scholars, novelists and artists – as well as other producers of popular culture.

When I was growing up, the history depicted in Israeli high-school textbooks, as well as the historical narrative promulgated by the mass media (there was only one television channel in Israel at the time, which was government run), was validated by famous novelists and public intellectuals. According to a PhD thesis written by Alon Gan from Tel Aviv University, Amos Oz, for example, interviewed soldiers after the 1967 war and used his editorial prerogative to excise descriptions of abuse in order to produce an image of the moral Israeli combatant.

Thinking back to the days when I was involved in Peace Now, I now realise that, even for most Israeli doves at the time, a conflicted history only emerged post-1967 – with the occupation of the Sinai, West Bank, Gaza Strip and the Golan Heights. Accordingly, the solution offered by Peace Now addressed the wrongs created in 1967, but had nothing to say about 1948. Indeed, I do not recall any reference to the Palestinian refugees in their publications. The seamless way in which the state had managed to completely suture the happenings of 1948, even among the Israeli peace camp, was indeed remarkable. [Continue reading…]

1 thought on “Erasing the Nakba”