Al Jazeera reports: Buoyed by the winds of change sweeping the region, Libyan women are eyeing a far greater role for themselves after next month’s national assembly elections.

The June 19 poll – the first since the fall of dictator Muammar Gaddafi – will see the country electing 200 candidates to the body that will draft the country’s constitution.

Recent polls in neighbouring Egypt and Tunisia have had mixed results for women, and the lessons are not lost on their Libyan counterparts.

In Egypt, parliamentary elections saw less than two per cent of the seats go to women – eight seats, compared to the 64 guaranteed to them by law. It was somewhat better in Tunisia, with 49 women getting elected.

Halloum al-Fallah, an independent candidate hopeful from the eastern city of Benghazi, said Libyan women are taking lessons from the Arab Spring in terms of how to fight for their place in politics.

“We are learning from the mistakes in Egypt and Tunisia, but also learning from what other countries are doing well,” said Fallah. [Continue reading…] 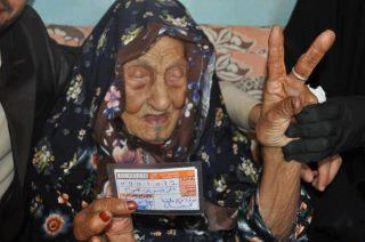 118 year old Nuwara Faraj Fahajan holds her vote registration card high in her right hand and the Victory sign by her left for the media and the admiring gathering to see, May 16 2012. Registration for voting in Libya is injecting new energy in all age groups in the country and providing them something to celebrate. (Tripoli Post)

2 thoughts on “Libyan women hope for gains in elections”