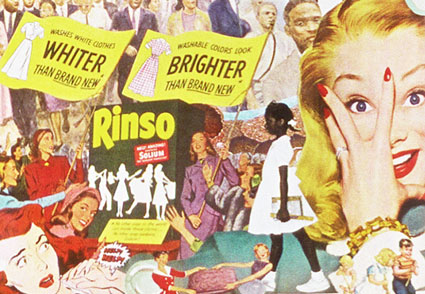 For the hotchpotch of Americans who are preoccupied by the odd concept of “whiteness”, July 2011 will be marked as an ominous but long anticipated turning point in this nation’s history: the Census Bureau now says that that was when non-white births for the “first time” outnumbered white births.

This might be the first time in the history of the Census Bureau although there must also have been another first time (not recorded) when white births first outnumbered those within the indigenous population, probably sometime in the mid-1700s.

The point at which this ceases to be a white dominated culture nevertheless does not appear to be near at hand. Even so, in anticipation of that event and in order to make that transition to a post-white America as unfraught as it should be, now would be a good juncture to start whittling away in earnest at the concept of a white race. Maybe by the time self-identified whites are no longer in charge we will have already discarded this ugly fabrication.

From an anthropological perspective the white race is pure fiction. We use Caucasian as a synonym for white but genetically Aasif Mandvi is just as Caucasian as Reese Witherspoon.

For those attached to the idea of an intrinsically European ethnicity, the only group who have a strong claim to such a thing are the Basques. Their ancestry is not only uniquely European but can be traced to the Cro-Magnon. Mind you, even if the Cro-Magnon qualify as the first modern humans in Europe, they didn’t originate from Europe.

And even if a tiny number of us can claim through Basque ancestry to possess a smidgen of Cro-Magnon blood, the fact remains that ultimately, without exception, our roots can all be traced to Africa.

The Associated Press reports: For the first time, racial and ethnic minorities make up more than half the children born in the U.S., capping decades of heady immigration growth that is now slowing.

New 2011 census estimates highlight sweeping changes in the nation’s racial makeup and the prolonged impact of a weak economy, which is now resulting in fewer Hispanics entering the U.S.

“This is an important landmark,” said Roderick Harrison, a former chief of racial statistics at the Census Bureau who is now a sociologist at Howard University. “This generation is growing up much more accustomed to diversity than its elders.”

The report comes as the Supreme Court prepares to rule on the legality of a strict immigration law in Arizona, with many states weighing similar get-tough measures.

“We remain in a dangerous period where those appealing to anti-immigration elements are fueling a divisiveness and hostility that might take decades to overcome,” Harrison said.

As a whole, the nation’s minority population continues to rise, following a higher-than-expected Hispanic count in the 2010 census. Minorities increased 1.9 percent to 114.1 million, or 36.6 percent of the total U.S. population, lifted by prior waves of immigration that brought in young families and boosted the number of Hispanic women in their prime childbearing years.

But a recent slowdown in the growth of the Hispanic and Asian populations is shifting notions on when the tipping point in U.S. diversity will come the time when non-Hispanic whites become a minority. After 2010 census results suggested a crossover as early as 2040, demographers now believe the pivotal moment may be pushed back several years when new projections are released in December.