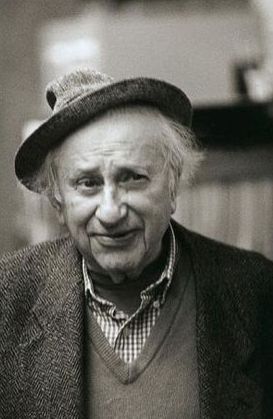 Gideon Haigh writes: Studs Terkel was in a buoyant mood in the spring of 1963 when he welcomed Marlon Brando onto his popular Chicago radio program. He had just won the Prix Italia for his celebrated documentary of nuclear dread, Born to Live; he was shortly to record passengers on board the Freedom Train to Washington for a haunting voice montage, This Train. And notoriously taciturn Brando, promoting his new film The Ugly American, proved at first no more than averagely contrary (“I don’t understand”; “I don’t think that’s true”; “I don’t think it related to that at all”). But as Terkel continued gently to harry him, the interview took an unexpected turn.

“Now I want to ask you a question,” Brando said abruptly. “You sit and ask many questions…You have an obligation to describe some of your feelings and point of view. What is it about a particular kind of work that interests you? Why are you preoccupied with these questions? What is the nature of your furrowing out this information from all manner of people? What kind of contribution does interviewing make to you?”

There was a pause. “This is a reversal,” Terkel responded uneasily. “I don’t know.” He hemmed. He hawed. He was anxious, he said equivocally, not to be voyeuristic; he guessed he was simply curious about an artist’s concept of art. Brando was unconvinced: “When I asked you simply to describe what you feel about your work, you became tense and concerned, perhaps a little confused, unsettled. When you ask me something, I could give you a glib answer, spieling. But if I want to answer the question honestly, I have to search my mind. When asked a simple question, it’s not easy to give a simple answer.”

The moment passed — Brando was too egotistical to pursue the inquiry, Terkel sufficiently adept to deflect it. But it was a rare moment in the storied career of perhaps the most admired chronicler of the last American century, when the spotlight was turned on him, when the biter was bit. On his death in October 2008, Terkel’s fellow Chicagoan Barack Obama exalted him as a “national treasure”; The Independent deemed him “the world’s greatest interviewer”; The Guardian claimed that “to register him as ‘writer and broadcaster’ would be like calling Louis Armstrong a ‘trumpeter’ or the Empire State Building an ‘office block’.” Yet despite his compilation of Working, Hard Times, The Good War, Race and other epics of national memory, Terkel successfully threw a thick cloak over his ‘private domain’ — ironic given how dedicatedly Terkel pursued untold stories and unheard voices. This week, Chicago marks the centenary of the birth of one of its most popular sons with a schedule of celebratory events, from showcasing some of the fruits of Terkel’s 9,000 recorded interviews to rededicating a bridge named for him twenty years ago. So how might he have answered had Brando pressed him? [Continue reading…]