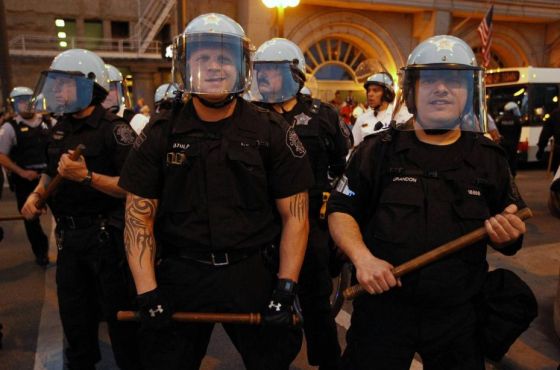 Bernard Harcourt writes: With Nato delegates arriving Saturday night, the City of Chicago has been turned into a police state. Courtesy of Mayor Rahm Emanuel, who several months ago began implementing new draconian anti-protest measures, Chicago has gone on security lockdown. Starting early Friday night, 18 May 2012, the Chicago Police Department began shutting down – prohibiting cars, bikes, and pedestrians – miles and miles of highways and roads in the heart of Chicago to create a security perimeter around downtown and McCormick Place (where the Nato summit is being held).

Eight-foot tall, anti-scale security fencing went up all over that perimeter and downtown, including Grant Park; and the Chicago police – as well as myriad other federal, state, and local law enforcement agencies, such as the FBI and the US secret service – were out in force on riot-geared horses, bikes, and patrols – batons at the ready. Philadelphia Police Department is sending over reinforcements to help out; Chicago has also asked for recruits from police departments in Milwaukee and Charlotte-Mecklenburg, NC. Meanwhile, F-16 warplanes “screamed through the skies as part of a pre-summit defense exercise” and helicopters hovered incessantly.

The Chicago Police Department has spent $1m in “riot-control equipment” in anticipation of the Nato summit. According to the Guardian, “The city of Chicago’s procurement services website shows that in March [2012] $757,657 was spent on 8,513 ‘retro-fit kits’ to be fitted to police helmets. In February [2012] 673 of the same kits, which include a face shield and ear and neck protectors, were purchased for $56,632.” Plus, the Chicago Police Department will be deploying its two, new, expensive long-range acoustic device (LRAD) sound cannons – which it bought at $20,000 a pop. These are the type of devices that were used by the Pittsburgh police to deliver high-pitched alarm tones during the G20 summit meeting there in 2009. [Continue reading…]