Sharif Nashashibi writes: Mauritania. Many people have never heard of it, and most would probably be unable to pinpoint it on a map, even though its land mass is larger than France and Germany combined. Many Arabs are unaware that it is a member of the Arab League. 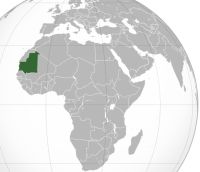 Even BlackBerry does not recognise it. Its messenger service auto-corrects “Mauritania” to “Martian” and, given public ignorance of the country, Mauritania might as well be on Mars. However, this could and should change.

Interviewed for a TV programme recently, I was asked whether Mauritania will be the next country to experience the Arab spring. In fact, it has been part of the spring since January 2011, when Yacoub Ould Dahoud fatally set himself alight in front of the presidential palace.

Protests have taken place across Mauritania ever since, spurred by the same factors as in other Arab states: economic, political and social disenfranchisement. But unlike those in Tunisia, Egypt, Libya, Bahrain, Yemen, Syria and elsewhere in the region, Mauritania’s have been barely a blip on the news radar.

This has led al-Jazeera to describe it as the overlooked uprising. Very low internet usage in the country – reportedly less than 2% of households – has made it difficult for Mauritanians to get their views, eyewitness accounts and images out to the rest of the world as has happened among other restive Arab populations.

The international community has historically taken little interest in Mauritania since its independence from France in 1960, because until recently it was seen as a poor expanse of desert with little strategic value (it has one of the lowest GDPs in Africa, making it among the poorest countries in the world).

However, its importance is likely to increase, and with it the world’s attention. Mauritania’s extensive iron ore deposits, which account for almost half of its exports, have increased in value due to rising metal prices, leading to more mines being opened, and hundreds of millions of dollars earned last year.

Furthermore, oil was discovered in 2001, although Mauritanians have yet to benefit because the country lacks the necessary infrastructure to fully exploit its reserves. However, with production on the rise, several oil exploration deals inked in the last year, and a population of just over 3 million, the potential windfall is huge.

As China makes economic and developmental inroads into Africa it may only be a matter of time before Mauritania’s largely untapped resources come into focus. This could irk the US into also seeking greater involvement, as Africa is fast becoming an economic battleground for the current and upcoming superpowers. [Continue reading…]