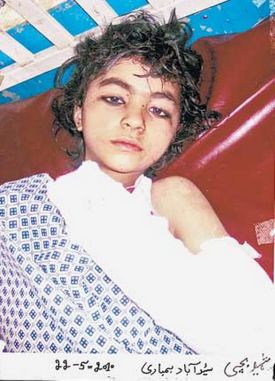 Jefferson Morley writes: Around midnight on May 21, 2010, a girl named Fatima was killed when a succession of U.S.-made Hellfire missiles, each of them five-feet long and traveling at close to 1,000 miles per hour, smashed a compound of houses in a mountain village of Mohammed Khel in North Waziristan along the Afghanistan-Pakistan border. Wounded in the explosions, which killed a half dozen men, Fatima and two other children were taken to a nearby hospital, where they died a few hours later.

Behram Noor, a Pakistani journalist, went to the hospital and took a picture of Fatima shortly before her death. Then, he went back to the scene of the explosions looking for evidence that might show who was responsible for the attack. In the rubble, he found a mechanism from a U.S.-made Hellfire missile and gave it to Reprieve, a British organization opposed to capital punishment, which shared photographs of the material with Salon. Reprieve executive director Clive Stafford Smith alluded to the missile fragments in an Op-Ed piece for the New York Times last fall. They have also been displayed in England.

“Forensically, it is important to show how the crime of murder happened (which is what it is here),” said Stafford Smith in an email. “One almost always uses the murder weapon in a case. But perhaps more important, I think this physical proof — this missile killed this child — is important to have people take it seriously.”

In the religious rhetoric used by al-Qaida’s online allies, Fatima was a “martyr.” In a statement quoted by Long War Journal, the al-Ansara forum said the senior al-Qaida commander Mustafa Abu Yazid had been killed in a “convoy of martyrs on the road with his wife and three daughters and his granddaughter; men, women and children; neighbors and loved ones.” But Fatima was not Yazid’s daughter, according to Noor, who reported from the scene. She was the daughter of another man who lost two wives and three children in the barrage.

In the euphemistic jargon of Washington, Fatima was “collateral damage” in the successful effort to assassinate Yazid, an Egyptian jihadist also known as Saeed al-Masri. In disregard for the official secrecy that envelops the drone war, U.S. intelligence officials leaked the classified details of the attack, telling the New York Times that they considered Yazid to be al-Qaida’s “No. 3 leader.” Relying on similar sources, the Washington Post said that al-Masri was the group’s “chief organizational manager.” Unlike other news organizations reporting on the attack, neither the Post nor the Times mentioned that women and children had been killed in the attack. [Continue reading…]