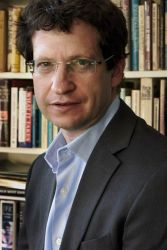 Daniel Klaidman, author of the soon-to-be-released Kill or Capture: The War on Terror and the Soul of the Obama Presidency, could be compared to a crow which feeds by ripping flesh off rotting carcases — but I think that would be unfair to crows. After all, they are just doing what they need to do to survive. Klaidman on the other hand is feeding off death for profit.

An excerpt from his book which appeared at the Daily Beast earlier this week is an example of servile propaganda at its worst.

At least in totalitarian states with their ministries of information and state-controlled newspapers, no one is under any illusion about the way in which governments shape public discourse. But in the United States with a nominally free press, accounts such as Klaidman’s purport to offer Americans outside government a rare glimpse into its innermost workings.

In this case we are being led to believe that we can now better understand what is actually happening when President Obama and a small circle of advisers make the weightiest decision anyone could ever make: when (if ever) it is justifiable to execute someone while suspending the legal constraints that otherwise control the use of capital punishment.

Klaidman’s approach to this story suggests that he investigated the issues in a similar way that an interior designer might discuss color choices with her client. His idea of depth is that he wants to find out how his subjects feel about killing people.

Klaidman tells us that Harold Hongju Koh and Jeh C. Johnson, the top lawyers at the State Department and the Pentagon, have found it stressful helping decide who gets to live or die. In other words, those observers who might imagine that a cold bureaucratic process is at work can be assured that Obama’s death panel operates with feeling and sensitivity and an acute sense of moral responsibility. These are not casual killers.

Like Koh, [Johnson] wondered whether he could withstand the heavy pressure exerted by the military to expand operations. After approving his first targeted killings one evening, he watched the digital images of the strike in real time — “Kill TV,” the military calls the live battlefield feed. Johnson could see the shadowy images of militants running drills in a training camp in Yemen. Then suddenly there was a bright flash. The figures that had been moving across the screen were gone. Johnson returned to his Georgetown home around midnight that evening, drained and exhausted. Later there were reports from human-rights groups that dozens of women and children had been killed in the attacks, reports that a military source involved in the operation termed “persuasive.” Johnson would confide to others, “If I were Catholic, I’d have to go to confession.”

If watching ones victims get executed on Kill TV evokes an image of cold brutality, we are assured that Washington’s practitioners of targeted killing, just like their Israeli counterparts, shoot and cry.

What Klaidman does through this style of narrative is set up a false intimacy — a sense that we really know what goes on in the so-called Terror Tuesday meetings because we now know that when Obama decides to kill someone who considers the matter very carefully.

The president is not a robotic killing machine. The choices he faces are brutally difficult, and he has struggled with them — sometimes turning them over in his mind again and again.

Is this what “due process” now means: that when executioner Obama issues a death sentence, it’s not an impulsive action; it’s something he actually spends some time thinking about? How reassuring!

If Klaidman was a serious journalist he would ask some serious questions. For instance, even though he might not be shown the intelligence information that forms the basis for Obama’s “kill list”, there are some relevant comparisons that he could attempt in order to expose the legal implications of what is now happening inside the White House.

For instance, is the process of deliberation inside Obama’s Star Chamber, more thorough than what happens inside a district attorney’s office in the process of considering a major criminal indictment? I suspect not, but if he had chosen to approach his subject with this amount of seriousness, Klaidman could easily have collected the kind of anecdotal evidence that would most likely make it clear that in the Obama administration, death sentences get handed out more casually than indictments. (In a summary of key moments from Klaidman’s book we learn that the State Department’s top legal adviser “would be presented with the classified PowerPoint slides, and would often have less than an hour to flick through them and determine whether or not the government had the legal authority to take out the target.”)

The picture Klaidman prefers to construct is one framed to a tee by the interests of President Obama. Whereas the CIA and the military are eager to kill as many suspected terrorists as possible, Obama is deeply concerned about the risk to innocent life.

Schooled as a constitutional lawyer, he had had to adjust quickly to the hardest part of the job: deciding whom to kill, when to kill them, and when it makes sense to put Americans in harm’s way. His instincts tilted toward justice and protecting the innocent, but he also knew that war is a messy business no matter how carefully it is conducted.

What Klaidman is doing here — and I suspect doing so in a completely mindless way — is sustaining a narrative that shapes the whole approach to drone warfare: that it goes without saying that the targets of drone strikes are guilty. In other words, no one even raises the possibility that the innocent might not only include bystanders but even the target himself.

The only time “mistakes” get reported they are of the form that a strike targeted such-and-such a suspect but ended up killing someone else. Whenever the intended target gets killed, it’s case closed. The dead are always guilty.

But how could this possibly be so? We know that it’s possible inside the elaborately constructed American capital punishment system, that after lengthy trials, appeals and sentence reviews, innocent people can still end up being executed. Why on earth would we assume that Obama’s execution process operates more efficiently?

When Klaidman presents the case of the first presidentially authorized assassination of a U.S. citizen, he doesn’t stray a fraction from the official narrative.

In Barack Obama’s mind, Anwar al-Awlaki was threat No. 1. The Yemen-based leader of AQAP had grown up in the United States, spoke fluent American-accented English, and had a charisma similar to that of Osama bin Laden: soft eyes, a mastery of language, and a sickening capacity for terror. Obama told his advisers that Awlaki was a higher priority than even Ayman al-Zawahiri, who had succeeded bin Laden as al Qaeda’s top commander. “Awlaki had things on the stove that were ready to boil over,” one of Obama’s national-security advisers observed. “Zawahiri was still looking for ingredients in the cupboard.”

What worried President Obama most was Awlaki’s ingenuity in developing murderous schemes that could evade America’s best defenses. Already he had launched the Christmas Day plot, in which a Nigerian operative had nearly brought down a packed airliner by trying to set off explosives hidden in his underwear. Then, in October 2010, AQAP had managed to put improvised bombs—ink toner cartridges filled with explosive material—on cargo planes headed to the United States. (They were intercepted as a result of a tip from Saudi intelligence.) During the summer of 2011 Obama was regularly updated on a particularly diabolical plan that AQAP’s master bomb builder, Ibrahim Hassan Tali al-Asiri, was devising. The intelligence indicated that he was close to being able to surgically implant bombs in people’s bodies. The wiring was cleverly designed to circumvent airport security, including full-body scanners. AQAP’s terror doctors had already successfully experimented with dogs and other animals.

The president made sure he got updates on Awlaki at every Terror Tuesday briefing. “I want Awlaki,” he said at one. “Don’t let up on him.” Hoss Cartwright even thought Obama’s rhetoric was starting to sound like that of George W. Bush, whom Cartwright had also briefed on many occasions. “Do you have everything you need to get this guy?” Obama would ask.

But that sense of fierce determination was a product of long experience and didn’t come easily. By the time United States intelligence agents got Awlaki in their sights, Obama had adjusted and readjusted his views on targeted killings several times. Usually he tried to measure the possible benefits of a specific killing or killings against the possible downsides, including the slaying of innocents and getting the United States more deeply embroiled in civil conflicts. The Awlaki case was in a special category, however: By almost anyone’s definition, he was a threat to the homeland, but he was also an American citizen, born in New Mexico.

The capture of a Somali operative who worked closely with Awlaki produced key intelligence, including how he traveled, the configuration of his convoys, his modes of communication, and the elaborate security measures he and his entourage took. Finally, in the spring and summer of last year, U.S. and Yemeni intelligence started to draw a bead on him. A tip from a Yemeni source and a fatal lapse in operational security by the cleric eventually did him in.

The claims that Awlaki masterminded and led terrorist operations have never been substantiated. If there really was significant evidence that he had such an operational role, it seems extremely unlikely that Obama would have any reason to need to press the case for the urgency of Awlaki’s elimination. The CIA and the Pentagon would be leading that charge without any need for Obama to crack the whip.

A much more plausible explanation for Obama’s obsession with Awlaki is one that could not be easily accommodated inside a legal framework. It wasn’t that the American cleric was in the process of devising a dastardly new way to insert explosives into underwear; it was the real threat he posed as a propagandist. That is, Awlaki represented one of the worst fears of anyone involved in counterterrorism: that as an American-born, charismatic and articulate preacher, he was capable of recruiting radicalized Caucasian converts to Islam.

Of course it this was Obama’s fear, killing Awlaki with a drone strike was no way to avert the danger since even now, as a propagandist he remains alive and well on YouTube. But these are issues that are of no apparent interest to Klaidman as he tells us how Obama learned to kill.

Perhaps the worst feature of Klaidman’s work is that he is collaborating in the definition of the new normal.

When Bush and Cheney instituted the use of torture, this provoked national debate. Even if they were able to exploit national fears that had produced a widely permissive attitude towards so-called “harsh interrogation” methods, Bush and Cheney were in some measure held accountable for choosing to adopt these practices.

When Obama entered office with the support of many Americans who imagined he was the antidote to the extremism of the previous administration, he swiftly reinforced that perception by banning the use of torture.

But when it transpired that he had banned torture only to replace it with murder, rather than this prompt loud expressions of outrage, we are being told to see this as the “evolution” of a president who is grappling with the harsh realities of the era.

This is a much more insidious message: that Obama is simply doing what anyone in his shoes would feel compelled to do; that targeted killing should now be seen as an enduring feature of U.S. foreign policy.

1 thought on “Journalism in the service of killing”