Are you as smart as a crow? Take this test to find out.

I’m proud to say I got it right the first time — but I probably had an advantage: I tamed two crows when I was a kid so I’ve spent some time staring them in the eye.

As a nine-year-old had I been growing up in an indigenous tribe on another continent I dare say my feat of being able to call a crow from a tree and have it swoop down and land on my outstretched arm might have set me on course for training as a shaman. Instead, after one of these crows swooped down to examine what kind of tasty morsel was tucked inside a baby stroller, protests from a distraught mother meant that these over-inquisitive crows were no longer welcome in our neighborhood. I had to promptly take the crows away and let them cause trouble some place else.

Forty-five years ago crows were under-appreciated. Now they are recognized as among the most intelligent creatures on the planet, able to pass on knowledge from one generation to the next and with tool-making skills that surpass those of chimpanzees. (To learn more, watch the video below.) Perhaps most intriguing, crows are able to recognize individual human faces. While we find it difficult to tell one crow from another, they can spot the differences between us from hundreds of feet away.

Professor John Marzluff at the University of Washington has studied crows’ face recognition abilities and speculates that crows need to be able to differentiate between people so that they can spot individuals who pose a threat. Robert Krulwich, describing Marzluff’s explanation for this aspect of crow intelligence, says: “It pays for a crow to pay attention, while we people, we are not threatened or helped by individual crows. So they need to know about us but we don’t need to know about them individually. And that’s what I call the crow paradox.” 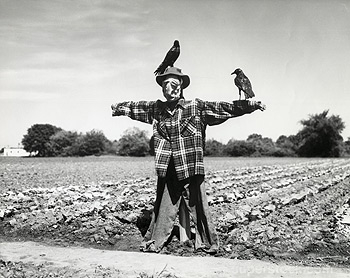 I’ll come back to this paradox shortly, but I don’t find the idea very persuasive that crows need to be able to spot dangerous people.

The ancient and continued use of scarecrows is a testament to the enduring need of farmers to scare crows along with farmers’ stubborn persistence in using a technique that is largely ineffective. For the wary crow, the truly dangerous farmer is all too easy to spot — not by his face but by unmistakable warnings he often posts: shot crows strung up like mascots promising a similar fate to those who venture too near to his valuable crops.

A crow’s ability to recognize a human face may actually have nothing to do with a need to to differentiate individual people from one another. It may instead be a by-product of the fine level of discrimination crows need to be able to differentiate one crow from another inside their own complex social systems.

For the eye to which no two crows look alike, the differences between any two much larger people must seem all the more extreme. As for why crows would hone in on facial differences, it would be for exactly the same reason that people do: because we change attire and the face is the one feature of appearance and identity that maintains day-to-day continuity.

Returning then to Krulwich’s supposed crow paradox — that they need to be able to differentiate among us individually while we have no need to be able to distinguish one crow from another — there is in this idea a very anthropomorphic image of social structure where important individuals stand out and the unimportant blend into a homogenous mass. The implication is that the crow pays attention to the dangerous person while ignoring everyone else.

This is a very human idea — that some people don’t matter — and reflects a social deficit we incur by constructing social structures that stretch far beyond our perceptual horizons.

For the crow and probably every other non-human social animal, the world, circumscribed by the reach of the senses, is not filtered through preoccupations about a wider world. We, on the other hand, are perpetually inattentive to our immediate surroundings because we place our attention elsewhere — on thoughts, feelings, memories, expectations — on the things that we tell ourselves matter most.

Through this bifurcation between that which matters and that which supposedly doesn’t, we lose the keen alertness in which for birds and animals a much wider spectrum of the present, bound within a perceptual horizon, always matters.

4 thoughts on “What crows can teach people”