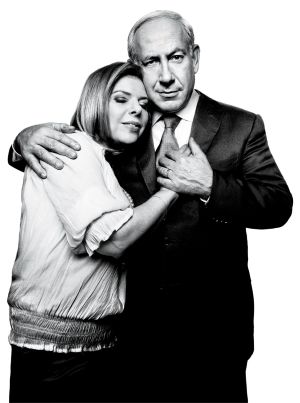 David Margolick writes: Seconds into any conversation about Netanyahu, the subject of Sara, whom he married in 1991, invariably comes up. It’s amazing how many otherwise sane Israelis see her Lady Macbeth–like hand in every corner of her husband’s life and work — whom he hires, what he does and doesn’t do, whom he can and cannot see. One hears constantly that Sara “has something” on her husband, stemming from her decision to stick by him after the highly publicized affair to which he admitted early in their marriage when his political career hung in the balance. One also hears of a supposed contract between the two of them, said to have been drafted by a former attorney general of Israel, squirreled away in some safe. Or of Bibi cowering in the bathroom, calling the childhood friends of his whom she has excommunicated.

Friend and foe alike have stories about Sara — about a tantrum or feud or some abuse of the household help — or some illustration of her vanity, like the time when, dissatisfied with the picture of her that Yediot Aharonot was about to run, she had her husband call the paper’s famously private owner, Noni Mozes, from Washington, demanding it be changed. People offer medical or psychological diagnoses, and speculate, without any apparent knowledge, about the medications she might be on. Her every misstep or peccadillo is covered minutely in the Israeli press (at least that portion Adelson doesn’t own), particularly her repeated run-ins with the help, several of which have led to lawsuits. Since ordering employees to call her “Ha Giveret” (“The Lady”) — an act of colossal hubris in a country rooted in unpretentious egalitarianism — it’s what she’s routinely and derisively called.

Numerous former staffers say her imbroglios periodically bring governance to a halt, forcing her husband to leave key meetings to tend to trivial matters or simply to calm her down. No one seriously contends that she will determine what happens with Iran. But many think she denies Netanyahu the serenity a man in his position needs. “She is a clear and present danger to the national security of the state of Israel,” one of Netanyahu’s prime critics, Ben Caspit, of the Israeli tabloid Maariv, told me. Just how, foreign minister Avigdor Lieberman is said to have asked, can a man control a government when he can’t control his wife? (Already hobbled by a pending corruption investigation, Lieberman, who heads the party of former Soviet immigrants, is considered a big loser in the recent political machinations. So too are Yair Lapid, a former anchorman who’d recently launched his own party, and Shelly Yachimovich, whose Labor Party stood to regain some seats — and at least some of its historic influence — in a new vote.)

For all his political pre-eminence, Netanyahu, still convinced Israeli liberal elites consider him a “usurper,” remains highly suspicious, even paranoid. “In every criticism, Bibi sees an attempt to bring him down,” Uzi Arad, his former national-security adviser and one of many people with whom he has had a falling-out, told Yediot Aharonot in March. So he’s insular: his principal lawyer — David Shimron, who handles the numerous lawsuits Bibi and Sara have brought against their household employees and the press — is his cousin; a cousin-in-law, Yitzhak Molcho, is his most important diplomat, marginalizing both Lieberman (at least as foreign minister) and Israel’s ambassador to Washington, Michael Oren; Netanyahu’s long-time chief of staff, Natan Eshel, forced to resign earlier this year in a sexual-harassment scandal, never really went away and handled the recent negotiations with Kadima. Shimon Shiffer of Yediot Aharonot says that Netanyahu once told him that he has no friends, something Netanyahu denies saying. One often hears — and not just from Netanyahu’s detractors — “Bibi has two types of friends: those he has betrayed, and those he will betray.”

Netanyahu was recently quoted by Steve Linde of The Jerusalem Post as saying that Israel’s most formidable foes were The New York Times and Haaretz, the newspaper of Israel’s intelligentsia. (He denies saying or believing this, and Linde subsequently published a clarification.) But Netanyahu has feuded with the Times and, one former aide tells me, considers Times columnist Thomas Friedman, a frequent critic, to be a mouthpiece of the Obama administration. That battle pales, though, next to Netanyahu’s wars with the Israeli press, which pilloried him during his first term. Like many Israelis on the left, it never forgave Netanyahu for Rabin’s assassination, which it believed his inflammatory language helped foment.

Netanyahu has expended vastly more energy — and enjoyed far greater success — reshaping the Israeli media than seeking peace with the Palestinians. As one observer puts it, he is less Israel’s prime minister than its editor in chief.

Netanyahu’s influence over the media comes in large part due to the financial support of his friend, American billionaire casino boss Sheldon Adelson.

Adelson, who reportedly first met Netanyahu in the 1990s, speaks no Hebrew and does not live in Israel, though his wife is Israeli. But, most likely with Netanyahu’s coaching, he came to believe that Israel’s three main newspapers did not represent the diverse Israeli public, and resolved to give Israelis what he called — borrowing Fox News’s slogan — a more “fair and balanced” alternative. At first he tried to buy Maariv. His pitch wasn’t subtle; he accused the paper’s owner, Ofer Nimrodi, of being a bad Zionist. (Nimrodi, his parents, and his two sons have all served in either Israeli intelligence or the Israeli Defense Forces.) Not surprisingly, a deal never happened. So, in 2007, Adelson launched a new paper, Israel Hayom (“Israel Today”). Instantly, understandably, it was dubbed “Bibiton”: “Bibi’s Newspaper” in Hebrew. Israeli journalists compare it half-facetiously to Pravda or Tishreen, the house organ of Syrian president Bashar al-Assad. Because its biases are so blatant, the conservative columnist Kalman Libeskind, of Maariv, recently wrote, he’d never thought it worth criticizing. But its “complete symbiosis” with Netanyahu and his interests, he complained, sometimes “really makes you want to puke.”

From its debut, Adelson’s paper — the tens or even hundreds of millions of dollars he has dumped into it dwarfs the comparative pittance he invested in Newt Gingrich’s failed presidential bid — enjoyed two advantages: it’s free (even with home delivery) and ubiquitous, handed out everywhere. By leaching away readers and advertisers, it posed a mortal threat to Yediot Aharonot and Maariv. Maariv has already fallen into new, more Bibi-friendly hands. And after a period of all-out war with Netanyahu — in which, for instance, it plastered details of a maid’s lawsuit against the First Couple over several pages — Yediot Aharonot has recently toned things down. Many see that as evidence of a hudna, or truce, between Netanyahu and the paper, though who has conceded what isn’t clear.

“Almost the whole Israeli media is dependent upon Bibi,” says a former editor of Maariv, Amnon Dankner, “and while I won’t say they’re not criticizing him, the music has changed — to quieter, less vociferous tones.” [Continue reading…]