Ynet reports on a “tourist attraction” in the West Bank settlement block of Gush Etzion where visitors from the U.S. and around the world are taught by former IDF soldiers how to kill “terrorists.” 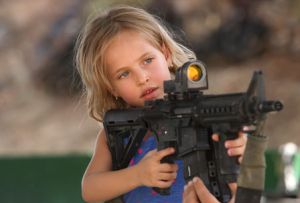 'First she cried, then she fired'

Michel Brown, 40, a Miami banker, chose to take his wife and three children to the range with the purpose of “teaching them values.”

Upon entering the range, his five-year-old daughter, Tamara, bursts into tears. A half hour later, she is holding a gun and shooting clay bullets like a pro.

“This is part of their education,” Michel says as he proudly watches his daughter. “They should know where they come from and also feel some action.”

Sharon Gat, the range’s manager, says all the instructors at the site have served in elite IDF units.

“This is a special program created due to popular demand,” he says. “Travelers from all over the world come here to meet former combat troops and hear stories about elite units. It’s a once-in-a-lifetime experience.”

“We heard on the news about shootings in the West Bank,” the mother, Olga, says. “We came to see it in person.”

Her son, Jacob, 24, puts down his rifle and exclaims: “This is an awesome experience. I learned how to stop a terrorist and how to rescue hostages. Now, when I find myself in distress, I will know how to deal.”

Davidi Pearl, who heads the Gush Etzion Regional Council, notes that this kind of experience turns the district into a world-famous “tourist gem.”

At the end of the thrill-filled day, the tourists get a diploma indicating they “completed a basic shooting course in Israel.”

“Boom, boom,” the 13-year-old Riley mutters on the way out of the range.