At The Arabist, Bilal Ahmed writes: The most striking thing about these elections, and probably one of its most important lasting effects, is the accuracy of the independent tallies conducted by the Muslim Brotherhood and its political faction the Freedom and Justice Party. There is no other organized political force in Egypt with the resources to accurately conduct polling at all of Egypt’s 16,000 polling stations, and the MB has not squandered its opportunity to occupy this role.

The MB results for the Egyptian revolutionary parliament seven months ago and the first round of presidential elections at the end of May were more or less in line with the final election results. The results that were announced for the Morsi/Shafiq contest this morning only differed from the MB figures by about 0.06%, which ranks this election among the least manipulated in Egyptian history. Through this successful organizing, the MB has successfully implanted an idea in the media and political consciousness where its results can be trusted as accurate figures. This makes it difficult for manipulation to occur on a state level, as defying the Muslim Brotherhood figures now makes voter fraud much more evident.

Given the thousands of people who flocked into Tahrir Square and staged sit-ins when voting results were delayed last week, this is a severe political risk for institutions attempting to preserve their Mubarak-era privilege.

Last week’s announcement of victory at Morsi’s campaign headquarters put massive pressure on senior officials to not consider tampering with election results and cause a Shafik presidency. This pressure was felt in Tahrir Square as equally as it was in the Obama Administration, which announced that it would reconsider its lucrative military assistance package to Egypt if power was not handed to a civilian government. It is true that in all likelihood, the Supreme Council of the Armed Forces is satisfied with a Morsi executive that is stripped of its power, but its obvious preference for Ahmed Shafiq was made much more difficult the moment that the MB’s independent exit polls announced this morning’s results.

It may seem odd to state in a political climate where many revolutionaries don’t trust the MB and its FJP candidates, but the Muslim Brotherhood electoral results are trustworthy. It may, in fact, be the most trustworthy part of the entire organization and its most positive contribution to the ongoing Egyptian revolution. The Muslim Brotherhood now officially has a reputation of offering a source of accurate electoral information that minimizes the chance of voter fraud.

Zeynep Tufekci adds: [T]he Muslim Brotherhood (or Ikhwan as Egyptians refer to them) made it harder for the election to be stolen because they combined a superior ground game with active and sophisticated online presence to control the narrative and force a level of transparency. (In other words, they forced it such that if the elections were going to be stolen, it was going to be “in-your-face” stolen which is a very different method with greatly different political implications than “under-the-rug” stolen).

First, Muslim Brotherhood has a fairly active presence online, and especially in Twitter (although only their English feed is interactive at the moment). Throughout the election night, they kept tweeting out updated results: 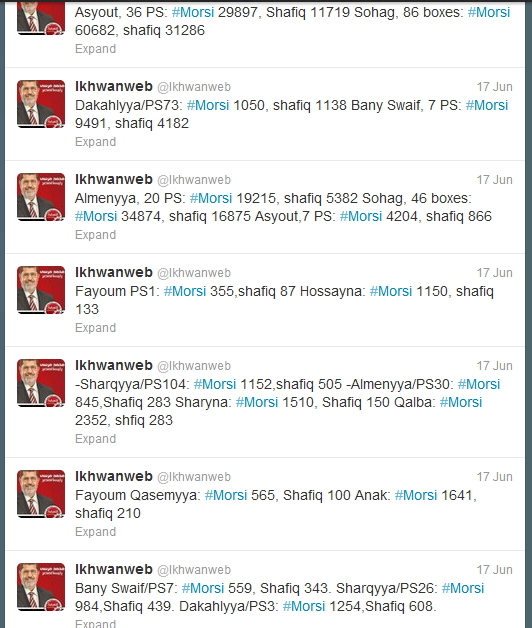 I was curious about where they got their numbers so I asked them:

About 10 minutes later, I had a reply that they had people at polling stations who updated them regularly. [Full disclosure: I do personally know at least one of the young woman who runs their English feed; in fact, most of my contacts with Muslim Brotherhood have been with young women as they happen to be quite active on their new media operations]. Other people I knew confirmed that MB had people on the ground at polling stations and were feeding results to the central headquarters as they became available. [Continue reading…]