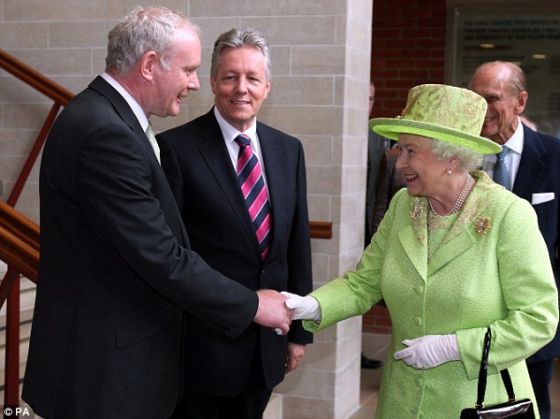 The historic encounter between the former IRA commander – now Northern Ireland’s deputy first minister – and the Queen was unthinkable a little over 10 years ago.

But the success of the peace process and the Queen’s acclaimed visit to the Republic of Ireland last year, when her conciliatory words and gestures won over many critics of the monarchy, paved the way for their meeting.

The much-anticipated first handshake took place away from the media spotlight behind closed doors.

They later shook hands in public. McGuinness held the monarch’s hands for a few moments and spoke to her in Irish. He told her the words meant: “Goodbye and God’s speed.”

McGuinness was a senior member of the IRA when it killed the Queen’s cousin Lord Mountbatten in a bomb blast in 1979.

The Queen is the head of Britain’s armed forces, seen in the past by Republicans as occupying troops in Northern Ireland.