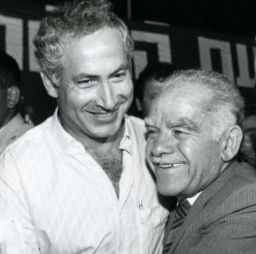 The Financial Times reports: Yitzhak Shamir, who has died at the age of 96, is most likely to be remembered as a terrorist against British rule in Palestine during the 1940s and as a man whose aggressive Jewish settlement policy on Arab lands may have stymied Middle East peace for a generation.

Benjamin Netanyahu, Israel’s prime minister, said Shamir “belonged to the generation of giants that established the state of Israel and fought for the freedom of the Jewish people in its land”.

In the New York Times, Joel Brinkley writes: Under [Shamir’s] leadership [in 1942 the Stern Gang] began a campaign of what it called personal terror, assassinating top British military and government officers, often gunning them down in the street.

To the Jewish public, and even to the other Jewish underground groups, Mr. Shamir’s gang was “lacking even a spark of humanity and Jewish conscience,” Israel Rokach, the mayor of Tel Aviv, said in 1944 after Stern Gang gunmen shot three British police officers on the streets of his city.

Years later, however, Mr. Shamir contended that it had been more humane to assassinate specific military or political figures than to attack military installations and possibly kill innocent people, as the other underground groups did. Besides, he once said, “a man who goes forth to take the life of another whom he does not know must believe only one thing: that by his act he will change the course of history.”

Several histories of the period have asserted that he masterminded a failed attempt to kill the British high commissioner, Sir Harold MacMichael, and the killing in Cairo of Britain’s minister of state for the Middle East, Lord Moyne. When Mr. Shamir was asked about these episodes in later years, his denials held a certain evasive tone.

It was during his time in the underground that Mr. Shamir met Shulamit Levy, who was his courier and confidante, he wrote in his autobiography, “Summing Up.” The couple married in 1944, meeting at a location in Jerusalem and gathering people off the street as witnesses, said their daughter, Gilada Diamant. After a hasty ceremony in deep cover, each departed immediately for a separate city.

In addition to his daughter, Mr. Shamir is survived by a son, Yair, five grandchildren and seven great-grandchildren. His wife died last year.

For a brief period after World War II, the three major Jewish underground groups cooperated — until the bombing of the King David Hotel in Jerusalem on July 22, 1946. Scores of people were killed, and Mr. Shamir was among those arrested and exiled to an internment camp in Eritrea. But he escaped a few months later and took refuge in France. He arrived in the newly independent Israel in May 1948.

Mr. Shamir was a pariah of sorts to the new Labor government of Israel, which regarded him as a terrorist. Rebuffed in his efforts to work in the government, he drifted from one small job to another until 1955, when he finally found a government agency that appreciated his past: the Mossad, Israel’s intelligence service.

President Obama: “Yitzhak Shamir dedicated his life to the State of Israel. From his days working for Israel’s independence to his service as Prime Minister, he strengthened Israel’s security and advanced the partnership between the United States and Israel. Our thoughts and prayers are with his family and the people of Israel.”