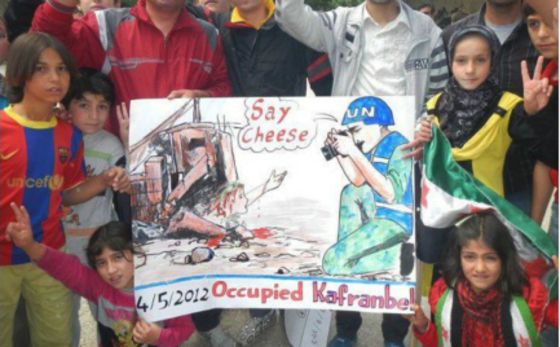 Foreign Policy: A town in northwestern Syria has become the creative center of the revolt against President Bashar al-Assad. Since the beginning of the uprising, the residents of Kafr Anbel have drawn signs that skewer the Assad regime and express outrage that the world has not done more to stop the killing in Syria.

The signs come in two basic varieties. Some are cartoons, often drawing their inspiration from Western movies or TV shows, which lampoon the Syrian government and its allies, notably Russian President Vladimir Putin. Others are straightforward, text-only banners that call for NATO intervention in Syria or arming the rebel Free Syrian Army (FSA). Many of the signs are written in English.

Raed Fares, an activist in Kafr Anbel, explained to FP that the town’s residents chose to draw in English, rather than Arabic, explicitly to reach an international audience. “It’s very important to send our message to all the world,” he said. “And English is the public language.”

1 thought on “The banners from Kafranbel, a town in northwestern Syria”