The Associated Press reports: Mitt Romney told Jewish donors Monday that their culture is part of what has allowed them to be more economically successful than the Palestinians, outraging Palestinian leaders who suggested his comments were racist and out of touch with the realities of the Middle East. His campaign later said his remarks were mischaracterized. 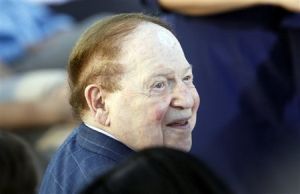 “As you come here and you see the GDP per capita, for instance, in Israel which is about $21,000 dollars, and compare that with the GDP per capita just across the areas managed by the Palestinian Authority, which is more like $10,000 per capita, you notice such a dramatically stark difference in economic vitality,” the Republican presidential candidate told about 40 wealthy donors who ate breakfast at the luxurious King David Hotel.

Romney said some economic histories have theorized that “culture makes all the difference.”

“And as I come here and I look out over this city and consider the accomplishments of the people of this nation, I recognize the power of at least culture and a few other things,” Romney said, citing an innovative business climate, the Jewish history of thriving in difficult circumstances and the “hand of providence.” He said similar disparity exists between neighboring countries, like Mexico and the United States.

Palestinian reaction to Romney was swift and pointed.

“It is a racist statement and this man doesn’t realize that the Palestinian economy cannot reach its potential because there is an Israeli occupation,” said Saeb Erekat, a senior aide to Palestinian President Mahmoud Abbas.

“It seems to me this man lacks information, knowledge, vision and understanding of this region and its people,” Erekat added. “He also lacks knowledge about the Israelis themselves. I have not heard any Israeli official speak about cultural superiority.”

As criticism mounted while Romney traveled to Poland, campaign spokeswoman Andrea Saul said: “His comments were grossly mischaracterized.” The Republican’s campaign contends Romney’s comparison of countries that are close to each other and have wide income disparities – the U.S. and Mexico, Chile and Ecuador – shows his comments were broader than just the comparison between Israel and Palestine.

While speaking to U.S. audiences, Romney often highlights culture as a key to economic success and emphasizes the power of the American entrepreneurial spirit compared to the values of other countries. But his decision to highlight cultural differences in a region where such differences have helped fuel violence for generations raises new questions about the former businessman’s diplomacy skills. [Continue reading…]

As Think Progress notes, Romney was way off the mark in outlining the economic disparity between Israelis and Palestinians — Israel’s GDP of US$31,000 compared to the West Bank and Gaza’s US$1,500. And then of course there is the question as to how economically vibrant Israel would be if it faced military occupation, the relentless confiscation of property, restrictions on freedom of movement, and inadequate infrastructure.