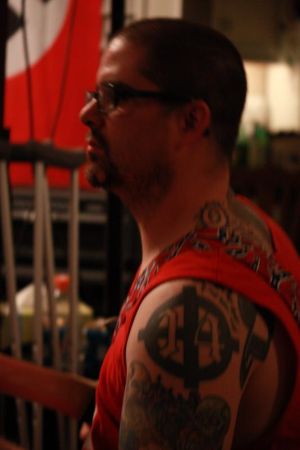 Wade Michael Page, vocalist and guitarist in the band 'End Apathy' and suspected gunman in the Sikh temple shooting. Note Page's Confederate flag design guitar-strap and the Nazi flag draped behind his band.

Is there much chance that America will own its latest mass murderer?

When a white man picks up a gun and slaughters a bunch of fellow Americans, the most predictable feature of the subsequent process through which everyone else tries to come to terms with what happened is that it will be seen as an isolated event. We will look at it through the narrow prism of the personal history of the gunman and his idiosyncratic pathology and refuse to acknowledge that the killing might also have been shaped by some of the darker contours of the surrounding culture.

In the case of Wade Michael Page, the suspect in the Sikh temple shootings that took place in Wisconsin yesterday, there are already a few indications that this time some cultural context becomes inescapable.

The Southern Poverty Law Center has already pointed out some of the white supremacist connections that surely say a great deal about why Page chose his targets.

The man who allegedly murdered six people at a Sikh temple in suburban Milwaukee yesterday, identified in media reports as Wade Michael Page, was a frustrated neo-Nazi who had been the leader of a racist white-power band.

In 2010, Page, then the leader of the band End Apathy, gave an interview to the white supremacist website Label 56. He said that when he started the band in 2005, its name reflected his wish to “figure out how to end people’s apathetic ways” and start “moving forward.” “I was willing to point out some of my faults on how I was holding myself back,” Page said. Later, he added, “The inspiration was based on frustration that we have the potential to accomplish so much more as individuals and a society in whole.” He did not discuss violence in the interview.

Page told the website that he had been a part of the white power music scene since 2000, when he left his native Colorado on a motorcycle. He attended white power concerts in Georgia, North Carolina, West Virginia and Colorado. At various times, he said, he also played in the hate rock bands Youngland (2001-2003), Celtic Warrior, Radikahl, Max Resist, Intimidation One, Aggressive Force and Blue Eyed Devils. End Apathy, he said, included “Brent” on bass and “Ozzie” on drums; the men were former members of Definite Hate and another band, 13 Knots.

In 2000, the Southern Poverty Law Center has found that Page also attempted to purchase goods from the neo-Nazi National Alliance, then America’s most important hate group.

The fact that many (most?) Americans are too ignorant to know the difference between a Sikh and a Muslim is reason, some observers infer, to think that Page wrongly believed the people he was killing were Muslims. But given the other indications of his racist xenophobia, it seems quite likely that Page bore equal animosity towards everyone who in his eyes did not look like an ‘American.’

If American xenophobia does not frequently express itself through mass murder on American soil, the tentacles of racism — particularly fear and hatred of Muslims — nevertheless spread far and wide.

Pastor John Hagee, Pastor Terry Jones, Robert Spencer, Pamela Geller, Sam Harris, Frank Gafney, David Yerushalmi, Daniel Pipes, Steven Emerson, Geert Wilders, Michael Savage — all would no doubt disavow Page’s action, yet they share a kind of spiritual kinship. At one end of the spectrum are those who can apply varying degrees of intellectual sophistication to soften the edges of their fear of Islam and to dampen the flames of hatred with what appears like cool rationality. Yet the underlying message they promote is that Islam is a pathogen and individual Muslims are infecting America.

Once in a while this message gets translated into physical action as individuals such as Wade Michael Page take it upon themselves to engage in a barbaric act of ‘cultural defense.’ And at such moments all attention turns to the brutality on display while very little goes to the tendrils of the mycelium through which the fungus of hatred permeates this society.

Where pluralism has demanded that Americans broaden their knowledge of the world, instead political correctness has provided effective tools through which hatred can be kept alive, yet largely out of sight.

2 thoughts on “An all-American racist”