The Wall Street Journal reports: Opposition fighters locked in battle for Syria’s largest city, Aleppo, have a new resource: Rebels now control a swath of territory to their north, including two border crossings with Turkey.

The opposition hopes its first substantial enclave of the 17-month uprising, seized from the government in the past few weeks, will transform a fight that for months has seen no clear victor. A similar enclave allowed Libyan rebels to sustain their fight in Libya last year. 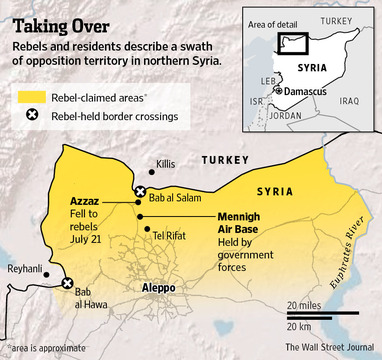 Already, the Syrian enclave has made it easier for rebels to bring fighters, weapons, food, fuel and other logistic needs to Aleppo.

The battle for Syria’s commercial capital could be pivotal. A rebel victory there would deal an unprecedented blow to President Bashar al-Assad’s rule; regime dominance there could free Mr. Assad’s troops to try to regain the north.

Thursday’s fighting in Aleppo brought the latest shift in the unresolved battle: A government offensive drove rebel militias from the southern neighborhood of Salaheddin, amid heavy army shelling of several other neighborhoods on the outskirts of the city of 2.2 million, according to rebel fighters and residents.

Rebels, who had held Salaheddin for more than a week, gave conflicting reports of whether they staged a strategic retreat or were overrun by the ferocity of the government attack.

Mr. Assad’s security forces lost control of the sweep of countryside north of Aleppo in late July, fleeing an offensive by rebel groups from across the rural north. Since then, local village committees that steered the uprising have shifted gears, transforming themselves into interim village governments. Rebel checkpoints now dot the winding single-lane roads between the region’s farming villages and towns.

Except for a lone air base where loyalist soldiers are hunkered down and mostly surrounded by rebel fighters, the countryside stretching from Aleppo to the Turkish border about 30 miles away has been cleared of government forces.

The Syrian border town of Azzaz, to Aleppo’s north, fell to rebel fighters on July 21, and much of the rest of the countryside north of Aleppo fell within days, rebels said. About a week ago, rebel fighters-turned-bureaucrats took up posts at a pair of border crossings with Turkey, one near Azzaz and the other west of Aleppo. Crisply dressed rebels check passports of new arrivals, enter names into computers and extend a welcome hand to “Free Syria.”

Samir Haj Omar, an economist who now heads the local 30-member political council in Azzaz, said Turkish officials have been more willing to deal with him and other rebel leaders now that they are de facto governors.

He has used that newfound heft to convince Turkey to allow cargo trucks to cross the border. On Wednesday, the first new shipments of rice, flour and gasoline arrived in rebel-controlled northern Syria, according to local officials here.

Throughout the north, a region where many civilians had fled or remained locked in their houses to avoid the regime’s crackdown on protests, people now fill village streets. Shops have reopened in recent days for the first time in four months. In the village of Maraa, children flocked to a reopened public swimming pool to cool off on Thursday. Abandoned Syrian Army tanks have been converted to makeshift playgrounds.

For fighters desperately trying to keep up supplies of food, fuel and weapons, the ability to freely cross the Turkish border and move between villages without fear of encountering regime forces is a dramatic change.

Earlier in the conflict, supplies were ferried across the Turkish border by horse, or on foot, by smugglers traversing muddy trails while dodging Turkish and Syrian border guards. A local fighter in Azzaz who said he helped smuggle in local rebels’ first rocket propelled grenades earlier this year said it took them weeks to negotiate the treacherous route through regime-controlled territory for just two RPGs.

Now, such supply shipments can make the run from the Turkish border to the front line in Aleppo in about 90 minutes.