Some of those who need to read this note and the article that follows perhaps won’t because they are still too busily absorbed in the obscenely foolish idea that Syria is being destroyed not by its own rulers but by powers outside that blood-drenched country.

For many months the world has been witness to images of wholesale destruction — cities reduced to rubble — and yet even now, there are some observers who still find it difficult to unequivocally assign blame for this violence. Assad’s tanks, artillery, bombers, and helicopters pound Aleppo and other cities with shells, bombs, and missiles, and yet there are those who regard this as a legitimate yet regrettable response to provocation and foreign meddling.

Among the ranks of the overt or implicit apologists for Assad, the award for the supreme expression of idiocy probably deserves to go to Amal Saad-Ghorayeb for what she wrote in June:

The Palestinian cause has become deeply etched in the Arab collective subconscious and has even become an increasingly pervasive slogan in western liberal activist discourse. Now the real litmus of Arab intellectuals’ and activists’ commitment to the Palestinian cause is no longer their support for Palestinian rights, but rather, their support for the Assad leadership’s struggle against the imperialist-Zionist-Arab moderate axis’ onslaught against it. [My emphasis]

If to some degree that view resonates with your own, please spare me. I have no interest in your elaboration or in engaging in what would undoubtedly be a fruitless debate. There are other venues where such discussions take place.

That’s it for my little rant. Now read this. It’s a first-hand account by a writer who has an intimate knowledge of Syria because she comes from a prominent Alawite family who — except for her — have remained resolutely loyal supporters of President Bashar al Assad.

It was not yet 5 on Tuesday morning. I was lying on one side of the bed and the two little girls I was watching were on the other. None of us had slept a wink. Snipers’ gunfire rang out from time to time; bombs were crashing all around us. The girls’ frightened mother entered the room. “The bombing is getting worse,” she said.

We ran out, heading downstairs. Women and children and some men had gathered in the shelter. The children were now capable of distinguishing between the sound of bombs and gunfire, between distant and nearby shelling, and they could discern the direction from which it was all coming.

Ever since we had entered the country, running across the border late Sunday night, four young men had gone out of their way to protect me. They cut a hole in the barbed wire fence so that I could scramble through. A bomb fell very close to us as we sped away. Bombs were falling the whole way as the car zoomed along. As we passed through the town of Atarib in the dark, I understood what “extermination” meant. Atarib was a completely decimated city: the streets were cratered by bombs, doors were scorched, houses demolished, streets empty. At night not even the howling of dogs could be heard. It was a ghost town. No life whatsoever. Here and there, on one street or another, lay the charred remains of a government tank.

We should have gone to sleep after our long journey across the border from Turkey. We were exhausted. But in Saraqib, my host’s family had stayed up waiting for us, so we sat together into the wee hours of Monday morning as they told me about their neighbors who had been killed, about the young men who had been summarily executed in the town square.

Saraqib was one of the first towns to come out against the regime. The punishment was severe — siege, bombing, arrests and killing. Now it has five groups of Free Syrian Army battalions to protect it. Still, there are government snipers in the middle of town, with their headquarters inside the state radio and television building. There are nine in all; each works a four-hour shift in the building, which is protected by a tank that shells the town from time to time. Once, when the F.S.A. managed to take out a sniper, the government’s army responded by strafing the town with bombs. The townspeople say the snipers hunt people down and kill them at random.

A few days ago a sniper shot a 4-year-old girl, Diana, wounding her in the back, paralyzing her permanently. She was so small and frail that I couldn’t believe her body wasn’t totally pulverized by the impact of the bullet.

On Monday night, we went to meet a group of Free Syrian Army fighters in the town of Binnish. The oldest one was no more than 35. All were full of vitality and optimism, but also exhaustion. I shook hands with every man, except for one, who placed his hand on his heart and bowed respectfully.

They weren’t Islamic fundamentalists. I’ve encountered very few Islamist groups and have not observed any connection to Al Qaeda or Salafism, a movement based on a rigid, austere interpretation of Islam. The young men there told me that a few Salafi jihadis had started to appear recently, but that they did not constitute a significant number.

As we were sitting out on the balcony overlooking an olive orchard, the bombs started falling all around us. Nearby, the town of Taftanaz was being shelled; we could see it from the balcony. I asked the head of the division, who’d prepared dinner for us, “Aren’t you afraid that a bomb might fall on your heads right now?” He replied: “We aren’t afraid. Death has become a part of our lives.”

As we dined, the main topic of discussion was Aleppo, Syria’s most populous city. A number of the young men present were from the besieged neighborhood of Salaheddin and were getting ready to return. They refused to let me go with them for fear of the looming battle. 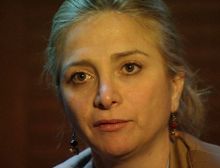 I was the only woman among them, and the young F.S.A. men treated me like part of the group. During that meeting it became clear that it’s a mistake to consider the F.S.A. as a single bloc. It is a hodgepodge of battalions, including secularists, moderate Islamists and all-too-ordinary people who joined up to defend their lives and their families.

At the end of our journey back to Saraqib, the commander told me, “We are one people, we and the Alawites are brothers. We had never thought about the sort of things that the regime is trying to stir up.”

I was silent for a moment, until I realized what he was telling me, the daughter of a well-known Alawite family that supports President Bashar al-Assad unconditionally. Some of my relatives have publicly disowned me for turning my back on the regime as many others have, announcing on Facebook that I am no longer considered one of them.