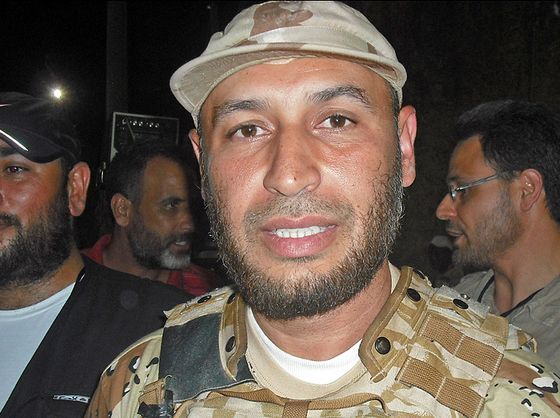 Mary Fitzgerald, foreign affairs correspondent for the Irish Times, writes: In a dusty schoolyard somewhere in Idlib province, several hundred men form neat rows before standing to attention. “Who are we?” bellows one man at the front. “Liwa al-Ummah!” the men reply in unison, pumping their guns in the air. They look different from your average Syrian rebel fighter, typically dressed in a scruffy mismatch of military fatigues and civilian clothes. Most of these men are decked out in identical fatigues, boots, and khaki-colored T-shirts. A handful sport dazzling white T-shirts emblazoned with the Liwa al-Ummah crest: a raised fist set against the tri-starred green, white, and black flag adopted by the Syrian rebels. “Revolutionaries of Sham,” it reads, using the Arabic term for historical greater Syria, above the name Liwa al-Ummah.

Sitting in an empty classroom flanked by several Syrian and Libyan fighters, a soft-spoken Libyan-born Irish citizen named Mahdi al-Harati explains how he came to be the leader of Liwa al-Ummah. The brigade emerged, he says, after several Syrians, aware of his experience as commander of the Tripoli Brigade during the Libyan revolution, approached him about founding a similar outfit in Syria.

The Tripoli Brigade was one of the first rebel units into the Libyan capital in August 2011. Its fighters, who included many Libyan expatriates, had received training from Qatari special forces in Nalut, a town in Libya’s western mountains. After the fall of Tripoli, during which he participated in the battle for Muammar al-Qaddafi’s Bab al-Aziziya compound, Harati was appointed deputy head of the Tripoli Military Council (TMC), serving under Abdel Hakim Belhaj, former leader of the now-defunct Libyan Islamic Fighting Group. Last autumn Harati stepped down as commander of the brigade and as TMC deputy. He made his first trip to Syria shortly afterward for what he says was initially humanitarian work in the country’s northern borderlands. The idea for Liwa al-Ummah came this year.

“There was a sense of increasing frustration among the Syrian thuwar [revolutionaries] over their lack of coordination,” he says. “They asked me if I could help them train and organize, and I agreed.”

According to Harati, more than 6,000 men across Syria have joined Liwa al-Ummah since its establishment three months ago. Most are members of existing rebel battalions or groups who decided to come under the Liwa al-Ummah umbrella; others signed up as individuals.

He says the brigade is separate from the Free Syrian Army, the loosely organized grouping of military defectors and civilian volunteers whose nominal leadership is based just over the border in Turkey. Liwa al-Ummah is also in the process of developing a Syrian-led political wing, as are an increasing number of other brigades.

Recently posted YouTube videos show a number of Syrian rebel factions announcing they have joined Liwa al-Ummah. Harati stresses that Syrians make up over 90 percent of the brigade. The rest are Libyans, most of them former members of the Tripoli Brigade, along with a smattering of other Arabs. Almost all use the honorific title “Sheikh Mahdi” when referring to Harati.

“We’re here to facilitate and train civilian rebels in Syria — many of whom are doctors, engineers, and teachers — using our experience during the Libyan revolution,” Harati says. “We are a group of civilians brought together for a cause. When the Syrians have achieved their revolution, our job will be done.”

With Harati are some of his closest confidants from Ireland and Libya. Back home in Dublin, where he lives with his Irish-born wife and four children, Harati teaches Arabic and is known as an activist who is heavily involved in the Palestinian cause. He took part in the 2010 Gaza-bound flotilla, which was intercepted by Israeli commandos, resulting in the deaths of nine people. [Continue reading…]