This is how state propaganda works. A bomb goes off in central Damascus, apparently targeting a meeting of top security officials, and the location of the attack is close to the Dama Rose Hotel which has been housing UN observers.

Another major breach of security threatens the Assad regime and so it attempts to obscure what has happened by claiming that rebels attacked the UN.

The slow-footed Western media with little else to rely on simply repeats the narrative pumped out by Syrian state media:

The government controlled channel said the explosion took place near a parking lot used by the army command, which is about 300 yards away.

Syrian Deputy Foreign Minister Faisal Mekdad toured the area of the blast and said none of the U.N. staff was hurt. The explosion occurred as U.N. humanitarian chief Valerie Amos was in the Syrian capital but her team is believed to be staying at a different hotel.

CBS News’ George Baghdadi reports the area near the blast was quiet following the explosion. There had been reports of clashes after the blast, but Baghdadi saw no sign of violence.

Mekdad called the explosion a “terrorist act” meant to “destabilize” the country.

The lot where the explosion occurred is near the Dama Rose Hotel, popular with the U.N. observers in Syria.

Here’s a screenshot that shows a firetruck outside the entrance to the hotel with a soldier in the foreground watching a firefighter on top of the truck directing a water cannon to the left. The scene of the explosion is off to the left, correct? 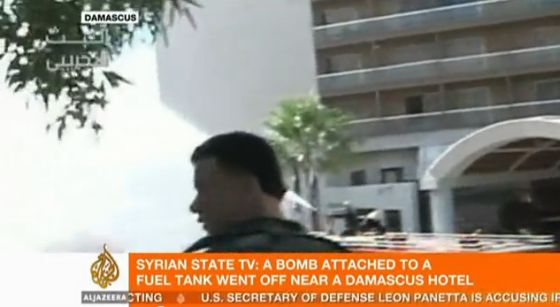 The camera pans to the left and we see the scene of the bombing: 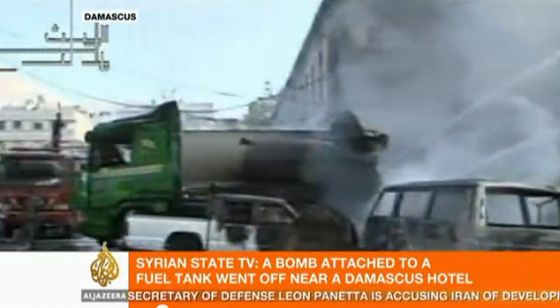 However, watch the video carefully and you will notice that the panning is actually the splicing together of two separate pieces of footage. In fact, the Syrian propaganda effort in its haste spin an implausible narrative (pause for a moment to consider: why would the FSA target the UN?) also included real evidence that the bomb did not target the Dama Rose Hotel but exploded several hundred meters away.

This screenshot from Syrian state TV images shows the Dama Rose Hotel to the left, and a thick plume of smoke rising beyond a building that separates the hotel from the site of the bombing: 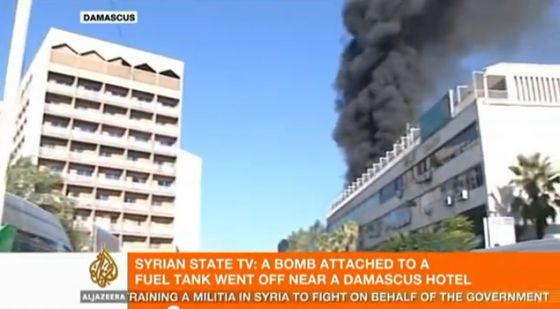 Site of bombing some distance from Dama Rose Hotel

The actual location of the bombing is shown here: 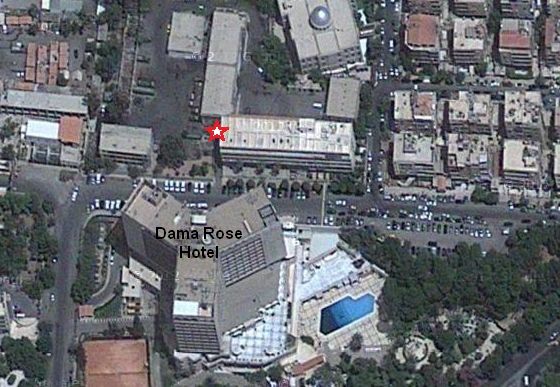 Location of blast shown with a red star.

This is a photo of the bombing location in which the Al Hassan Mosque can be seen in the background. 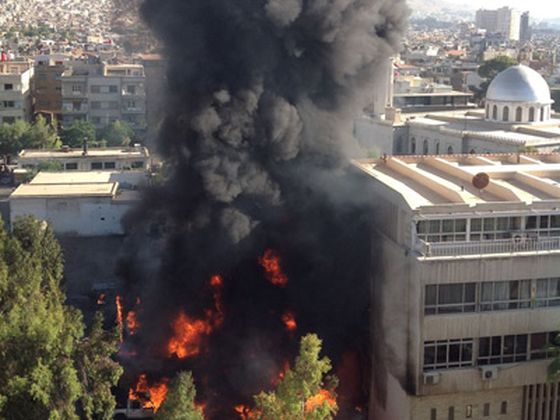 Al Jazeera interviewed Abu Noor, a FSA spokesman who explains where the bomb was located and who it was targeting.